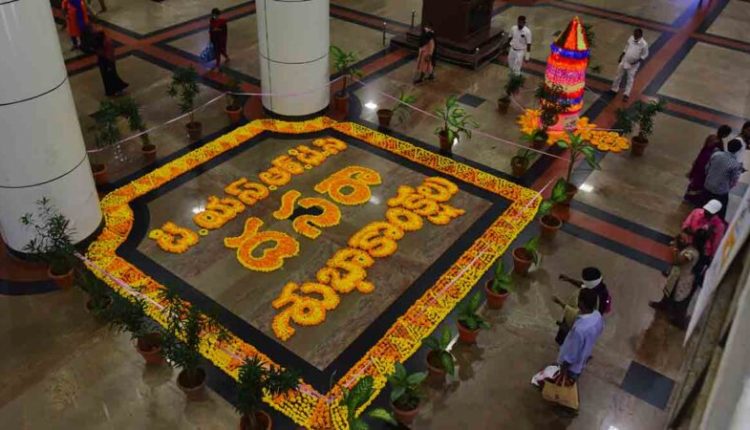 Hyderabad: All the key RTC terminals in the city from where buses head to various destinations in the State and also the neighbouring ones are abuzz with activity these days. With Navaratri festivities having picked pace, and people heading to their hometowns, the rush at the bus depots and terminals has peaked.

Unlike last year when Covid-19 pandemic cast a shadow over Dasara celebrations, people from other towns and cities this time have started to travel to their native places for the festive vacation. As Dasara vacation for educational institutions has already been announced, several parents were seen carrying their children to board Telangana State Road Transport Corporation (TSRTC) buses at various bus terminals.

“Last year, we could not visit our hometown due to the pandemic and subsequent restrictions. This time, we have made travel plans in advance as there might be heavy rush a day before the festival,” said Lakshmi, a passenger who is heading to Suryapet from MGBS.

The rush mainly is towards Karminagar, Nizamabad, Warangal, Nalgonda, Adilabad, Mahbubnagar districts in the State, the RTC officials said. “The festival passenger rush is good and the seat occupancy rate is nearly full,” said a conductor of the TSRTC bus.

To clear the passenger rush, the TSRTC has arranged 4,035 special buses including 950 long distance buses in addition to the regular buses to various destinations within the State and other neighboring States as well. These buses are being operated from MGBS, JBS, old CBS, Dilsukhnagar, LB Nagar, Uppal ring road, ECIL X Roads, KPHB, Miyapur, BHEL, Lingampally, and Ameerpet.

Of the total arranged buses, the TSRTC already operated 1,268 special buses and as passengers rush is expected to rise further in the run up to the festival, more buses will be operated. Further, the TSRTC this year has decided not to levy any extra fare and as a result, the bookings have gone up for the TSRTC buses.

“The reservations for the long journey buses have increased and also the number of passengers opting for the TSRTC has also gone up. We are seeing 80-90 per cent seat occupancy rate in most of the buses,” a senior official said. Apart from the RTC buses, buses being plied by the private operators are also witnessing good passenger rush.