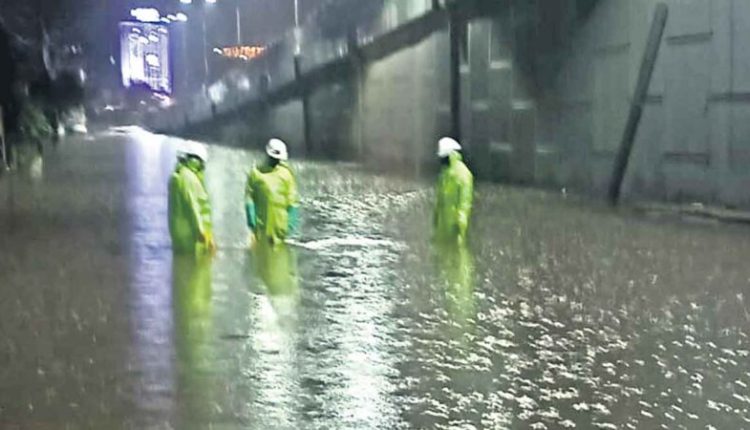 Hyderabad: In the last two days while Hyderabad witnessed rains perhaps like never before in recent times, the normal life in the city was not impacted severely.

This was made possible by the continuous efforts of the monsoon teams deployed by the Greater Hyderabad Municipal Corporation (GHMC). The men and machines team worked round-the-clock to bring back normalcy in the areas that got inundated due to the heavy and sudden downpour.

The GHMC received more than 100 complaints in the last two days apart from the grievances that were attended to and resolved by the Disaster Response Force (DRF) teams.

Both the teams worked tirelessly 24/7 and made sure that stagnant water were cleared within hours and fallen tree branches were removed as soon as possible. They regularly checked for choke points and cleaned catch-pits. Earthmovers were also used in some locations to clear nala blockages. In addition, GHMC’s sanitation workers removed silt and garbage in areas adversely impacted due to rains.

Banjara Colony in Hayat Nagar, P&T Colony in Gaddiannaram ward, Rein Bazar, Dhobighat in Yakutpura Assembly segment and Moosarambagh in Malakpet Assembly segment were among the many areas where the teams worked in shifts to bring back normalcy.

On Sunday, GHMC officials also cleared the debris after a wall collapsed in Road Number 10, Banjara Hills. While no casualties or injuries were reported, two cars were damaged after the wall collapse of government quarters which was structurally weak. The civic body officials have informed the Roads and Buildings (R&B) departments about the incident and the onus of construction lies with them.

150 families rehabilitated
Hyderabad: As a part of precautionary measures during the heavy rains, 150 families in Banjara Colony, Hayath Nagar ward were rehabilitated and arrangements including food and water, were made for them.

The rehabilitation centres were also identified in other low lying areas which are prone to inundation. Pumps, men and machinery were kept on standby at strategic locations. Several requests also poured in from apartment associations seeking pumping out of the water from cellars and they were resolved by the Disaster Response Force Teams.

Gates closed
With rains receding in the city and surroundings, inflows into Osman Sagar and Himayath Sagar from the upstream areas have decreased. Following this, the Hyderabad Metropolitan Water Supply and Sewerage Board (HMWS&SB) closed five gates of Himayat Sagar.

Though the water level in both the reservoirs stood at FTL for the second consecutive day, compared to Saturday the inflows dipped by 700 cuses in Osman Sagar and 2,000 cusecs in Himayat Sagar.