‘We just have to be greater’: Team USA sensation Biles claims feats by black women are ‘dimmed down’ even when records are broken 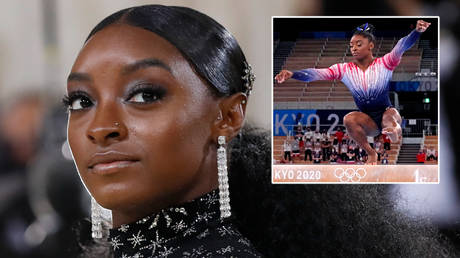 Gymnastics star Simone Biles has claimed that black women “have to be greater” and said that their achievements are “dimmed down” even when sporting records fall by the wayside.

A four-time gold medalist at the 2016 Rio Olympic Games, Biles endured a turbulent time at this summer’s Tokyo showpiece, briefly looking as if she might walk away empty-handed as she dealt with personal struggles.

The elastic-limbed 24-year-old eventually secured a silver medal in the team event and bronze in the balance beam final, and she has now suggested that she believes she has to considerably out-perform white athletes to earn the credit she deserves.

“As a black woman, we just have to be greater,” said Biles, speaking to writer and poet Camonghne Felix for New York. “Because even when we break records and stuff, they almost just dim it down – as if it’s just normal.”

Felix, who is a former speechwriter for Andrew Cuomo, the Democratic Party politician and governor of New York from 2011 to 2021, clearly agrees with Biles.

“I have a theory that if someone were to try and account for the exact amount of labor black women have forcefully and freely contributed to the US economy and culture, if America had to match us cent for sweat drop, it would be a number so great it would bankrupt all of this country’s resources,” she wrote.

“And if we’ve done it right, in the next generation, there will be no mules. We’ve done enough – the world will have to meet us on our terms.”

Biles is said to have been inspired by best-selling book ‘The Subtle Art of not Giving a F*ck’ as she has faced the pressures involved in her sensational career and being under the spotlight.

‘The FBI protected a child molester’: US gymnasts Biles & Maroney hit out at authorities at hearing into pedophile doctor Nassar

Before tying with Shannon Miller as the American female gymnast with the most medals of all time, Biles thought about leaving the sport when disgraced team doctor Larry Nassar hit the headlines for an appalling campaign of sexual abuse.

“I should have quit way before Tokyo, when Larry Nassar was in the media for two years,” she admitted, speaking after addressing the US Senate over the FBI’s handling of the Nassar case. “It was too much.

When she was asked whether she would alter any aspects of her gymnastics journey, Biles replied: “No, I wouldn’t change anything because everything happens for a reason.

“And I learned a lot about myself — courage, resilience, how to say no and speak up for yourself.”