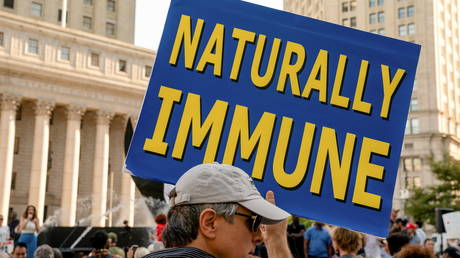 “The only way we can move past this pandemic is to ensure that everyone eligible is vaccinated, and that includes those who are taking care of our vulnerable family members and loved ones,” Hochul said after declaring a statewide disaster emergency.

On Monday, New York hospitals began firing or suspending staff who have defied the order to get vaccinated. Tens of thousands of healthcare workers in the state may have refused to take the shot, according to The Washington Post.

To address potential staff shortages, the governor has allowed doctors, nurses and social care workers from other states and countries to practice in New York, and cut some red tape in terms of registration of healthcare professionals, among other measures.

The governor will also monitor “whether the deployment of medically-trained National Guard members may be necessary to execute at any point,” according to her office.

State officials said the percentage of fully vaccinated hospital staff has grown from 77% to 84% since early August. They added that preliminary self-reported data shows 92% of hospital workers have received at least one dose of the vaccine.

Opponents of the mandate protested in New York over the weekend, chanting, “My body, my choice.” They continued to demonstrate in Manhattan and other parts of the city on Monday, denouncing Mayor Bill De Blasio and President Joe Biden’s support for the mandate.