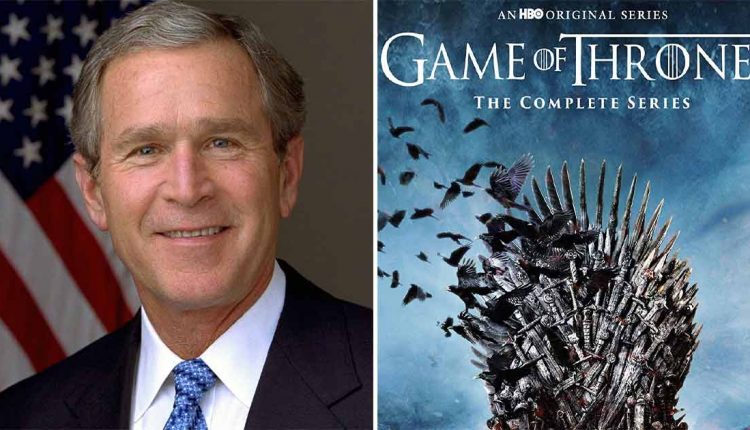 Game Of Thrones Trivia #8: Did You Know? Former US President George W Bush Made An Appearance In Season One But It Is Not What You Think (Photo Credit: Wikipedia & IMDb)

American fantasy drama television series, Game Of Thrones, which was created by David Benioff and D. B. Weiss has become a global phenomenon. The show brought the world together and made them fall in love with a fantasy land. Even though the show is dark and gritty, it has a few surprises that may have gone unnoticed.

The American fantasy drama television series is also known for shocking and heavy casualties fans have come to expect. However, it is also a show where one hell of a dragon egg is hidden in season one of the series. Ex-president George Bush made an appearance on the show and it is not what you think.

To recall season one of Game Of Thrones, in one of the episodes, King Joffrey takes Sansa Stark to gaze upon the spiked head of her dead father. Around 12 minutes in, you will see that one of the heads looks slightly familiar. One of the many heads on a spike decorating King’s Landing belonged to ex-president George Bush. This was discovered by Redditor SidIncognito.

Creators of the fantasy drama Game Of Thrones, David Benioff and D.B. Weiss also explained in their DVD commentary (from Season 1, Episode 10) that the decapitated head is actually George Bush. As per Gizmodo’s report, the DVD commentary read, “The last head on the left is George Bush. George Bush’s head appears in a couple of beheading scenes. It’s not a choice, it’s not a political statement. We just had to use whatever head we had around.”

The report also added a statement from HBO that reads, “We were deeply dismayed to see this and find it unacceptable, disrespectful and in very bad taste. We made this clear to the executive producers of the series who apologized immediately for this inadvertent careless mistake. We are sorry this happened and will have it removed from any future DVD production.

David Benioff and D.B. Weiss later also issued a statement, “What happened was this: we used a lot of prosthetic body parts on the show: heads, arms, etc. We can’t afford to have these all made from scratch, especially in scenes where we need a lot of them, so we rent them in bulk. After the scene was already shot, someone pointed out that one of the heads looked like George W. Bush.

In the DVD commentary, we mentioned this, though we should not have. We meant no disrespect to the former President and apologized if anything we said or did suggested otherwise.”

Must Read: James Bond Actor Daniel Craig Once Lashed Out At A Fan & Angrily Snatched His Phone For This Reason

The post Game Of Thrones Trivia #8: Former US President George W Bush Did An ‘Unexpected’ Cameo Which Was Too Deadly To Miss! appeared first on Koimoi.