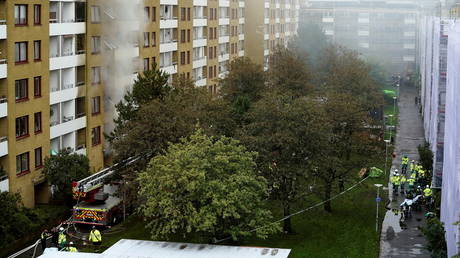 A powerful blast that tore through an apartment building in Sweden’s second most-populous city on Tuesday was not caused by a gas leak and probably involved foul play, Swedish authorities have said.

Swedish police are investigating whether an explosive device caused the blast that went off in Annedal district in central Gothenburg on Tuesday morning, starting a serious fire. The Sahlgrenska University Hospital said it was treating 16 people injured in the incident, four of them in serious condition.

The explosion rocked through the building just before 5am local time, damaging three stairwells. Some residents used tied sheets to escape from their homes through windows, as the fire ignited by the blast spread and sent thick plumes of grey smoke in the air.

Emergency services ruled out a gas leak as the cause of the explosion, confirming that there was no gas pipeline in the area, police spokesperson Thomas Fuxborg told a news conference. He said investigators’ working theory was that an explosive device was planted at the site.

Sweden has been gripped by an increasingly violent wave of gang violence, in which bombs have been used by rival criminals against each other among other weapons. The police said they couldn’t immediately identify any particular resident as a possible target for a bombing attack.

Some sources claim that a Swedish police who worked on criminal immigrant gangs lived in one of the apartments in this complex and he most likely was the target. This might also be a immigrant gang feud. Plenty of those in Gothenburg.

Replacing the Swedish people is so exciting. pic.twitter.com/mEhLf75Ibe

The police could not immediately collect evidence on the site to confirm foul play behind the explosion because of the blaze that followed. It required significant deployment of firefighters from seven nearby stations and hours of hard work to contain it. The responders managed to prevent its spread to other buildings, but the blast wave and the flames reportedly caused significant damage inside.

Annedal residents who lived nearby were advised to lock windows and stay inside due to the risk of smoke inhalation.

The four people hurt most by the blast were identified by health officials as three women in their 60s, 70s and 80s respectively and a man in his 50s. The youngest patient treated by the hospital is a 10-year-old child. One of the 16 is a firefighter, who was hurt when dealing with the fire.

Municipal authorities have offered assistance to people affected by the incident. A shelter was organized at a nearby church, with some 40 people, some in a state of shock, finding refuge there.

“This is terrible and of course completely unacceptable,” Axel Josefson, the chair of the Gothenburg municipal board, said of the explosion. He offered his condolences to victims and pledged that the city will do everything it can to support them.

Sweden’s national government reacted to the incident as well, with Interior Minister Mikael Damberg expressing confidence that the police would get to the bottom of what had happened.

France still an Indo-Pacific power ‘regardless of any contract,’ Macron insists amid AUKUS pact snub fallout

Friendly colleagues at job your gateway to better health