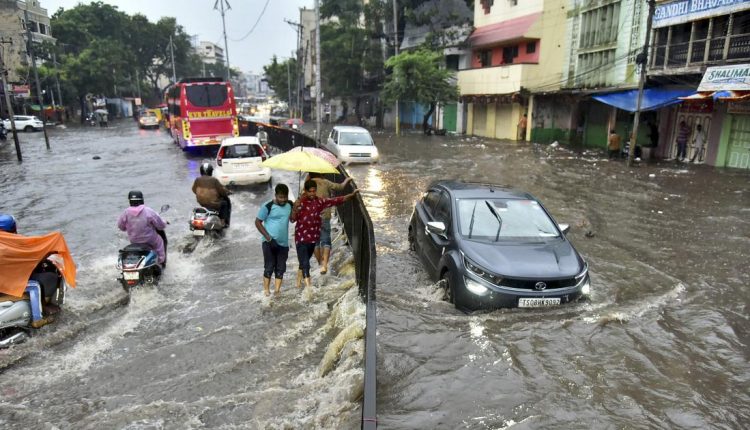 Parts of Telangana are likely to receive “very heavy to extremely heavy” rainfall over the next 12 hours, the India Meteorological Department said in its bulletin at 12.30 am on Tuesday.

The weather department said that the remnants of Cyclone Gulab lay centred over North Telangana and the Vidarbha region in Maharashtra.

Parts of Telangana received heavy rainfall on Monday too. Roads in Hyderabad were flooded, PTI reported.

The India Meteorological Department had on Monday issued an alert about flash floods for 17 districts of Telangana, the Hindustan Times reported.

In view of the weather warning, Telangana declared a holiday for all its government and private offices and educational institutions on Tuesday, according to the newspaper.

Meanwhile, Telangana Chief Minister K Chandrashekhar Rao assessed the weather situation. He directed Chief Secretary Somesh Kumar to be on alert for the next two days, the Hindustan Times reported.

Apart from Telangana, heavy rain is also likely to occur in parts of Goa, Maharashtra and Gujarat, the weather department said on Tuesday.

Cyclone Gulab, which hit Odisha and Andhra Pradesh on Sunday, has caused four deaths. Heavy rainfall caused by the storm uprooted trees and damaged electric poles. Many trains were cancelled.