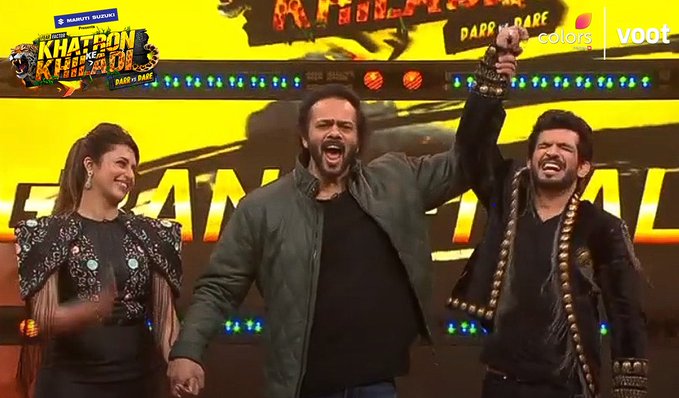 ‘Khatron Ke Khiladi 11’ winner Arjun Bijlani is on “top of the world”, for it has been arduous journey to the winner’s trophy and Rs 20 lakh in the reality show presented by Bollywood’s hit director Rohit Shetty.

After his victory was announced on Sunday night, Arjun said in a conversation with IANS: “This was such a long and tough journey. I had to do a lot of hard work to perform well in the show. Sometimes I felt like I would give up, but I kept moving ahead and was able to reach the finale.” He added: “And even after I reached that stage, it felt like there was a huge distance between me and the trophy. The finale stunt, moreover, was really tough. I am so happy that I finally won the trophy.”

The stunt was performed by Arjun Bijlani, Vishal Aditya Singh and Divyanka Tripathi. Arjun was able to pip first runner-up Divyanka by 20 seconds and lift the trophy, plus take home the cheque and a car. Vishal gave up midway.

Being on ‘KKK11’ came with its share of dangers, as suggested by the show name.

Arjun said: “My left shoulder was dislocated and I was recommended surgery. I chose not to go for that option and I never told anyone about my injury. It was really tough for me to do the stunts. Still, I managed.”

When asked how it was to be away from the family and relocate for a while to Cape Town, South Africa, Arjun said in his conversation with IANS: “It was a learning experience. As one has to do everything on one’s own. It isn’t easy to be away from your family. Even if you are injured or not feeling good, no one is there to care for you. No help is around you. You are on your own.”

Arjun added: “But yes, the stunts that we performed, you can’t do them even at an adventure park. The level of difficulty level increases every day and you have to keep performing tougher stunts. I learned from this show that the most important thing in life is to overcome your fear and face everything with confidence. Then only will you be able to solve problems.”

Talking about his most memorable moment, Arjun said: “I think it was when Rohit Sir said during the semi-final, ‘Arjun, never do hoo-haa after winning any stunt’. That was the most special moment for me because whenever I would come back after completing a stunt, someone used to say something or the other. I never got a chance to enjoy my victory. And I used to keep telling myself to ‘leave it and move ahead’ as I had done my bit. But as a host, Rohit Sir used to observe every action and contestant closely, so when he made the comment, it was indeed memorable.” He continued: “I was also able to make many good friends, such as Aastha Gill, Abhinav Shukla, Sana Makbul; in fact, I was on good terms with everyone. I still remember how they used to come to my room and we were so dependent on each other emotionally, being away from our families. We shared a lot of things, sang songs together and did a lot of ‘masti’. They will be my friends for a lifetime.” Divyanka, Arjun said, remained his biggest challenger till the very end, although he did believe that a number of those who got eliminated were really strong. “There were many contestants such as Saurabh Raj Jain, Vishal Aditya Singh and Abhinav Shukla, whom I considered to be strong, but they got eliminated early. Divyanka, however, really surprised me. She performed certain stunts exceptionally well and we both had a wonderful journey on the show. Till the end, Divyanka remained my biggest competitor.”

Asked about the toughest stunt he had to perform on the show, Arjun said: “It was the finale stunt, which was the longest and most difficult. Besides that, the underwater stunt in which we had to go inside a tunnel, cut through a fence and come out, was really tough.” Arjun concluded his IANS interview thanking his fans. “It was a tough battle but the support of my fans and their confidence in me gave me the strength to win the show. I am thankful to all my fans.” And for the fans, Arjun has become a role model for his dedication and determination.

Thohir warns Serie A to avoid another Calciopoli

Even a small drink not fit for driving!