‘Literally platforming a terrorist’: The New Yorker takes heat after it hosts climate activist arguing for ‘blowing up pipelines’ 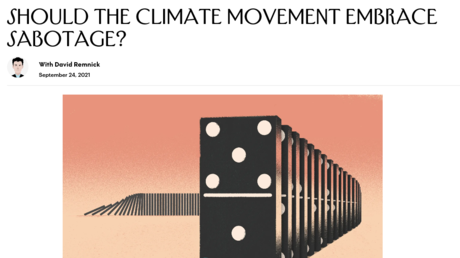 The New Yorker has faced accusations of promoting violence after its podcast featured a climate change activist, calling property destruction the most effective protest tool and praising violence that marred George Floyd protests.

Commentators online have been up in arms over the recent edition of The New Yorker’s podcast discussing whether the climate movement should “embrace sabotage” that saw one of the featured guests, ecology professor at Lund University in Sweden, Andreas Malm, arguing that one can attack energy pipelines for the sake of saving the environment.

Malm, who released a book titled “How to Blow Up a Pipeline:Learning to Fight in a World on Fire” earlier this year, appeared to have endorsed the ransomware attack that shut down the Colonial Pipeline in May, causing gasoline shortages on the US east coast, and seemingly called for attacks against Total and China’s CNOOC $3.5 billion crude pipeline in Uganda and Tanzania.

“If people in that region were to attack the construction equipment or blow up the pipeline before it’s completed, I would be all in favor of that. I don’t see how that property damage could be considered morally illegitimate given what we know of the consequences of such projects,” he said.

Malm boasted about his own role in property destruction campaign for the sake of the noble cause, saying that his group slashed tires of “thousands of SUVs” in 2007 in Sweden, arguing that the acts of vandalism led to a drop in demand for the vehicles.

Speaking about a wave of peaceful climate protests, including school-strike movement led by Greta Thunberg, Malm said that he does not mind these tactics, but is frustrated about activists’ “dogmatic commitment to non-violence.”

The most effective way to initiate change is to engage in violence but without hurting people, he argued, bringing up the Geordge Floyd protests that occasionally spiraled into violence, looting and fierce clashes with police.

Malm argued that the anti-police movement would not have achieved as much if not for “tremendous property destructions” Black Lives Matter (BLM) activists inflicted on public and private property.

Global Citizen Live’s message to society from mega-rich celebs is ‘make do with less.’ And that really sticks in my throat

“I don’t think that one can seriously argue that the BLM movement in 2020 would have achieved more if there had been no confrontation, no windows smashed, no police stations or cars burned, that’s a fantasy scenario in my view,” Malm said, calling the storming and torching of a Minneapolis police station “catalyst for the movement.”

Pluribus Editor Jeryl Bier accused the New Yorker of “literally platforming a terrorist.” Conservative pundit Jack Posobiec wrote: “The @NewYorker is now encouraging and training radical leftists how to blow up pipelines.” Neither on the podcast, nor in his book Malm provided any instruction on “how to blow up a pipeline”, but rather justified the method.

The guest literally calls for blowing up pipelines. Not a metaphor. @NewYorker literally platforming a terrorist. pic.twitter.com/pk4JXW5IT4

The @NewYorker is now encouraging and training radical leftists how to blow up pipelines pic.twitter.com/5oRnhYirZ9

One commenter went as far as to alert the FBI.  “Perhaps you’ve got some “informants” who might be able to infiltrate The @NewYorker or you might even consider some proactive steps,” he wrote.

I’m pretty sure “sabotage” is still a crime and “How to blow up a pipeline” might be part of a “conspiracy” or being an “accessory”.

Perhaps you’ve got some “informants” who might be able to infiltrate The @NewYorker or you might even consider some proactive steps. https://t.co/BQbaWDL1AT

For those keeping track at home, both the New Yorker and the New York Times are debating and soft endorsing terror acts against national pipelines in the name of climate. https://t.co/CglKa27Rk4

Audrey Trushke: What the myth of ‘love jihad’ tells us about the Hindu Right

Data check: As Harshal Patel picks up three in three for RCB versus MI, a look at all IPL hat-tricks

Taapsee Pannu urges media to recommend her name to makers of…