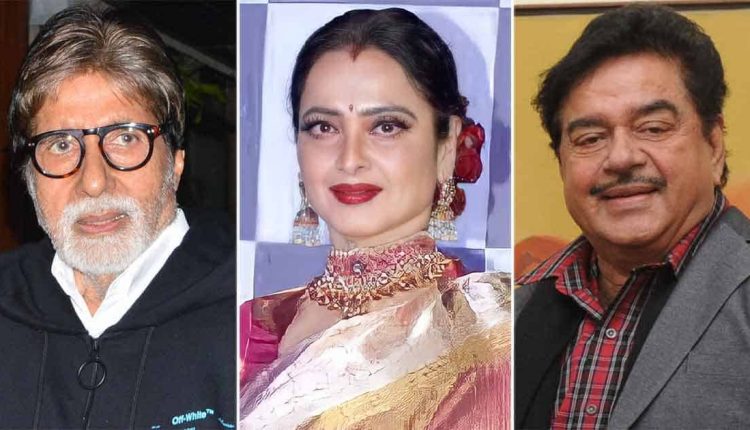 Shatrughan Sinha and Amitabh Bachchan’s friendship started off on a strong note but became bitter as time passed. Although the duo has worked in films together like Naseeb and Yaar Meri Zindagi but they didn’t click off-screen really well. In his memoir, ‘Anything But Khamosh: The Shatrughan Sinha Biography,’ the veteran actor spoke about his tiff with Big B and made some shocking revelations.

In fact, Shatrughan returned the signing amount of the few films which also had senior Bachchan in the cast and said, “The problem was the applause I was getting for my performances. Amitabh could see the response I was getting. That’s why he didn’t want me in some of his films.”

And to our surprise, Shatrughan Sinha also blamed Zeenat Aman and Rekha for his tiff with Amitabh Bachchan and wrote in his memoir, “During Kaala Patthar, a heroine who was known to be very friendly with him, would visit him. She would come during Dostana also but not once would he bring her out and introduce her to any of us. In showbiz, everybody knew who was visiting whom. The media would immediately know if Reena was in my make-up room. Such things can never be hidden in our world.”

However, in 2016, Amitabh Bachchan attended the launch event of Shatrughan Sinha’s memoir.

Shatrughan has time and again taken digs at Big B and once lashed out when he wasn’t invited to his son Abhishek Bachchan’s wedding with Aishwarya Rai.

In an interview with Mid-Day, the veteran actor said, “Jab bulaaya nahin phir mithai kis baat ki? Amitabh had said those who had not been invited were not his friends in the first place. I won’t be put in second place and embarrass him by accepting the sweets. The least I expected was that either Amitabh or someone from the family would call me up before sending the sweets. When that was not done, why the mithai? Hema Malini was not invited, neither were Dharmendra and Ramesh Sippy. Half of the industry that has stood by the Bachchans through thick and thin. All of us are currently in second place as Amitabh is being guided by a misguided missile called Amar Singh.”

As they say, all is well that ends well. The two actors, Amitabh Bachchan and Shatrughan Sinha now have a cordial relationship.

For more updates, stick to Koimoi.

Must Read: Shah Rukh Khan, Rajkumar Hirani’s Next Delay Reason Revealed & It Has A ‘Canada’ Connect

The post When Shatrughan Sinha Addressed His Rift With Amitabh Bachchan Blaming ‘Very Friendly’ Rekha For The Same appeared first on Koimoi.