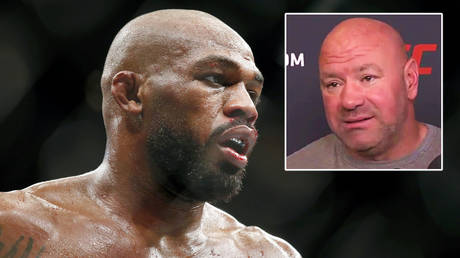 UFC president Dana White says that superstar fighter Jon Jones has a lot of ‘demons’ after the former light heavyweight champion was arrested in Las Vegas on charges of ‘misdemeanour battery domestic violence’.

Jones was detained by police in Las Vegas at 5:45am local time – just hours after he was inducted into the UFC Hall of Fame for his classic UFC 165 fight opposite Alexander Gustafsson – and will appear before a court in Sin City early on Saturday.

It is the latest legal turmoil facing one of mixed martial arts’ most dominant champions, and comes after he was arrested last year for driving while intoxicated and the negligent use of a firearm.

The 34-year-old was also arrested in 2015 after a hit-and-run incident which left a pregnant woman with a broken arm. Jones subsequently fled the scene but surrendered to authorities several hours later – with the UFC stripping Jones of his light heavyweight title as a result.

Jon Jones says he and Dana White are in a good place lately, and that he believes a deal will be struck for him to fight at heavyweight next year. pic.twitter.com/JgsifttEfC

Reacting to the latest legal issues facing one of his biggest stars, White said that he is no longer surprised when he is alerted to Jones’ transgressions.

“It’s like… it’s not even shocking anymore,” White said. “When we bring him here, it’s almost expected.

“You can’t even get him in Las Vegas for less than 12 hours to induct him into the Hall of Fame. It’s a problem.

“Here we are again.”

Dana White reacts to the news of Jon Jones’ arrest just hours after he was inducted into the UFC Hall of Fame. pic.twitter.com/qokM50mPyF

“You want to hope that the guy is better and that won’t be the case, but he proves that every time he comes to this town that he can’t handle this place.”

Dana White waiting for Jon Jones to released like… pic.twitter.com/jefGWfLozc

Jon Jones got inducted to the UFC HOF and got arrested the next day, Dana White typing up the new contract as we speak.

Jones, who hasn’t fought in the UFC since February of last year, spoke to the media hours before his arrest and, in comments which seem to have tempted fate somewhat, he said that he would have to start doing some “legally controversial sh*t” in order to boost his ability to sell pay-per-views.

“Dana, he guaranteed that he would give me an increase [in pay] in my next fight,” Jones told the media of the specifics of his return which he said will take place at heavyweight in the second quarter of 2022.

“I think that’s something I haven’t been good at in the past. Look at guys like [Conor] McGregor who just talks so much sh*t and he’s so good at it. He’s so good at marketing himself.

“I have just always focused on winning and I think when I come back as a heavyweight I’ll try and do more legally controversial sh*t so that I can sell a little more pay-per-views.”

Judging by Jones’ latest legal infraction, though, it appears that one of the best fighters in MMA history still has a little work to do in that regard.