Thieves accused of stealing Olympic champ’s medals in raid on her home ‘return them with apology, chocolates’ at Moscow checkpoint 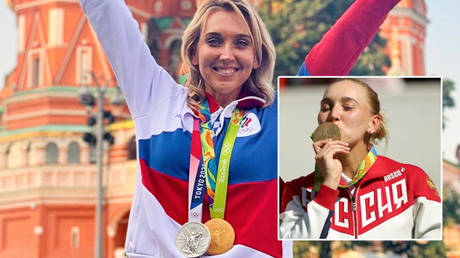 A gang of thieves who allegedly stole a Russian Olympic champion’s medals in a calculated raid on her home have reportedly returned them less than two weeks later alongside an apology and a box of chocolates.

Burglars are said to have attacked tennis hero Elena Vesnina’s home last month, making off with her gold doubles medal from the Rio 2016 Games and the mixed doubles silver she won in Tokyo this summer among their haul.

The intruders allegedly scaled a fence in broad daylight and swiped the precious honors while the former world doubles number one and husband Pavel Tabunstov had gone out for dinner.

Now the heartbreaking incident appears to have had a happier ending. According to kp.ru, a police source has revealed that the medals have been returned to a checkpoint in the Moscow region where Vesnina lives.

Elena #Vesnina‘s medals, both gold and silver, were stolen from her house when she and her husband were out for dinner.
She said she didn’t put medals into a safe because she showed them to kids in a tennis club.
But the safe was cracked and some jewelry were stolen as well. pic.twitter.com/bYBp84w6FX

“Together with the medals, they also left a box of chocolates,” the source is said to have added.

“They also put in a note of apology. But I did not see it – I cannot say what the content was.”

The 35-year-old, who took time out from tennis to give birth to a daughter in 2018, is said to have not kept the medals locked up because she had taken them out to show to children on a visit to a clinic.

“The robbers broke down the door, knocked down the security cameras, broke into the safe, stole jewelry and grabbed the bag with my medals,” she told the outlet at the time.

“Nobody was hurt. We were not at home. I wrote a statement for the police.”

Elena Vesnina with Ekaterina Makarova with their gold medals from the 2016 Olympic Games in Rio! pic.twitter.com/JuiqsYKMmZ

Vesnina made an impressive return to tennis this year after more than two years away from the professional sport, reaching the final of the French Open alongside fellow Russian star Aslan Karatsev.

Partnering Veronika Kudermetova, she had two match points to win the doubles title despite being in an unseeded pairing, ultimately suffering a narrow defeat to third seeds Hsieh Su-wei and Elise Mertens.

Kudermetova was her partner again at the Tokyo Olympics, where they lost in the semifinals to eventual gold medalists Barbora Krejcikova and Katerina Siniakova on their way to finishing fourth.

Vesnina and Karatsev were then edged out in an epic all-Russian final in the mixed doubles, failing to convert a match point in a third set super-tie break against Andrey Rublev and Anastasia Pavlyuchenkova.

Shooting for 17th season of ‘Grey’s…