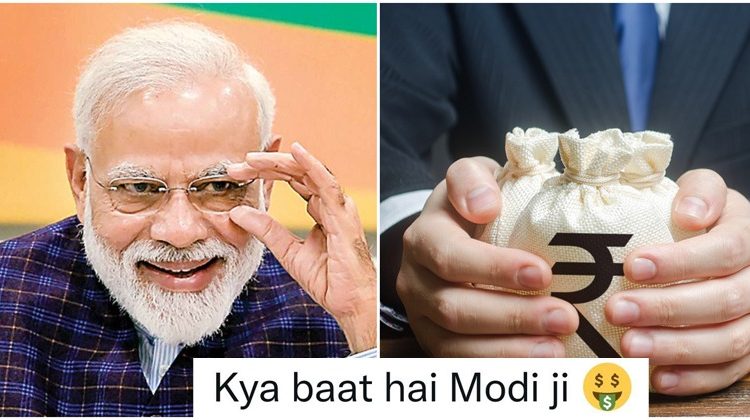 Let’s admit it! While we work our as*** off in mostly 9-5 jobs, one thing that continues to intrigue us is the salaries or earnings of renowned celebrities who have lavish lifestyles. Be it Bollywood actors, musicians, and other celebrities, we often wonder how much they earn in a span of a year, with Google always suggesting the word ‘Net Worth’ after every personality that we search online.

Now, if you’ve often done that, you would definitely be curious about finding what the Prime Minister of our country actually earns.

As things turn out, PM Narendra Modi has quite a net worth due to his earnings from leading our country in the last seven years and over the rest of his career.

Well, according to the official data released as per his latest declaration, PM Modi’s net worth is somewhere around Rs 3.07 crore. It saw a jump of almost Rs 22 lakh from last year which was around Rs 2.85 crore.

The 71-year-old prime minister actually does not possess any stock market exposure, with his investments being in the form of mostly the National Savings Certificate ( Rs 8.9 lakh), life insurance policies ( Rs1.5 lakh), and L&T infrastructure bonds, which he bought for Rs 20,000 back in 2012. As per reports, the increase in his wealth comes down mainly to his fixed deposits in a Gandhinagar branch of SBI.

PM Modi owns around four gold rings worth Rs 1.48 lakh, with his bank balance and cash in hand, amounting to Rs 1.5 lakh, and Rs 36,000 as of March 31 of this year. Since the prime minister came into power back in 2014, he has not bought any property with his only residential property being the one he bought in 2002, valued at Rs 1.1 crore.

That too is said to be a joint property in which PM Modi is said to have a one-fourth share in. The property is reported to be around 14,125 square feet with Modi’s rights being over 3,531 square feet of it.