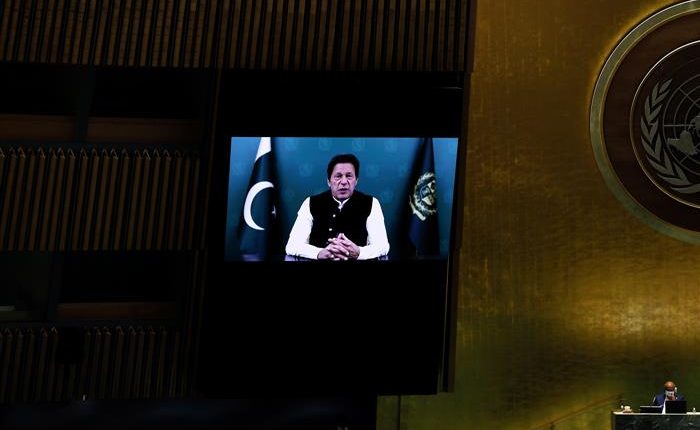 Prime Minister Imran Khan has sought to cast Pakistan as the victim of American ungratefulness and an international double standard in his address to the United Nations General Assembly.

In a prerecorded speech aired Friday evening, the Pakistani prime minister touched on a range of topics that included climate change, global Islamophobia and “the plunder of the developing world by their corrupt elites” — the latter of which he likened to what the East India Company did to India.

It was for India’s government that Khan reserved his harshest words, once again labelling Prime Minister Narendra Modi government “fascist.”

But the cricketer turned posh international celebrity turned politician was in turn indignant and plaintive as he painted the United States as an abandoner of both Pakistan and neighbouring Afghanistan.

“For the current situation in Afghanistan, for some reason, Pakistan has been blamed for the turn of events, by politicians in the United States and some politicians in Europe,” Khan said. “From this platform, I want them all to know, the country that suffered the most, apart from Afghanistan, was Pakistan when we joined the US war on terror after 9/11.”

He launched into a narrative that began with the United States and Pakistan training mujahedeen — regarded as heroes by the likes of then-President Ronald Reagan, he said — during the Soviet occupation of Afghanistan. But Pakistan was left to pick up the pieces — millions of refugees and new sectarian militant groups — when the Soviets and the Americans left in 1989.

Khan said the US sanctioned its former partner a year later, but then came calling again after the 9/11 attacks. Khan said Pakistan’s aid to the US cost 80,000 Pakistani lives and caused internal strife and dissent directed at the state, all while the US conducted drone attacks.

“So, when we hear this at the end. There is a lot of worry in the US about taking care of the interpreters and everyone who helped the US,” he said, referring to Afghanistan. “What about us?” Instead of a mere “word of appreciation”, Pakistan has received blame, Khan said.

Despite Khan’s rhetoric espousing a desire for peace, many Afghans have blamed Pakistan for the Taliban’s resurgence in Afghanistan because of close links.

The United Nations in August also rejected Pakistan’s request to give its side at a special meeting on Afghanistan, indicating the international community’s shared skepticism.

In his speech, Khan echoed what his foreign minister, Shah Mehmood Qureshi, told The Associated Press earlier this week on the sidelines at the UN: the international community should not isolate the Taliban, but instead strengthen the current Afghan government for the sake of the people.

He struck an optimistic tone about Taliban rule, saying their leaders had committed to human rights, an inclusive government and not allowing terrorists on Afghan soil. But messages from the Taliban have been mixed.

A Taliban founder told the AP earlier this week that the hard-liners would once again carry out executions and amputated hands — though this time after adjudication by judges, including women, and potentially not in public.

“If the world community incentivises them, and encourages them to walk this talk, it will be a win-win situation for everyone,” he said. — AP