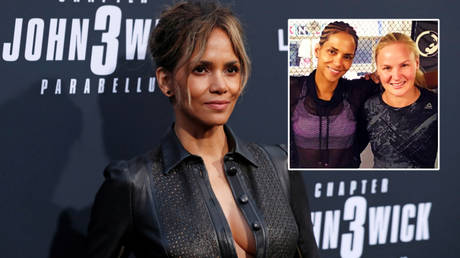 Valentina Shevchenko has issued a stirring endorsement of Halle Berry’s MMA skills after starring alongside the Oscar-winning actor in the forthcoming Netflix movie ‘Bruised’.

Shevchenko, who also stars in the film set to be released on November 24, says that she was tasked with helping Berry, 55, prepare for fighting scenes in the mixed martial arts film – but quickly discovered that there was no quick fix to do so without undertaking what she said was essentially a full-scale MMA training camp.

The Kyrgyzstani-Peruvian said that she couldn’t have been more impressed by Berry’s commitment – not just to to the role, but also to her mixed martial arts training.

“If you are speaking about training, she went not only just a few months for this movie. She went through all of this training for a couple of years,” the UFC women’s flyweight champion explained to MMA Fighting.

“That’s why about her toughness, I can say a lot. We were training leading into the [filming]. Filming days, we were training in New York for about two months and every single day we were working five hours straight, no rest.

“We were working different combinations, striking, punching, everything. She was doing this same every month. No resting, no saying anything, just doing it.“

Ahead of the movie’s release, Berry has spoken of the gruelling training regimen she undertook – but unlike most major stunts in Hollywood movies, the injuries Berry says she sustained were very real.

Berry, who won an Academy Award for her performance in 2002’s ‘Monster’s Ball’, has confirmed that she broke some ribs while filming scenes – and much like in an MMA training camp, the show had to go on.

That was something which impressed Shevchenko greatly.

“You have to make it not only look real, you have to actually do it real,” she said. “The tiny line between a real fight and a movie fight, you have to work with your partner to feel each other.

“You have to feel each other to make her confident that it looks like you are throwing with your whole power but you have to know that you’re never going to damage her.

“But definitely when it’s filming days, we were working for like 12 hours straight doing all the sequences and everyone was tired and, definitely, it was a lot of pressure. Physical pressure.

“When you are tired, this is when injuries happen because you are kind of defending the same way that you have to and it’s the same everywhere. When you’re tired – very tired – there are more chances you’re going to get injured.

“We did real sparring. We did real training for the fight scenes in the movie. It was an amazing experience working with her.”

While Shevchenko explained that the fight scenes were just that – scenes – she says that it is impossible to avoid a few punches slipping through, and she confirmed that Berry has legitimate power in her hands.

And after a career spent in the spotlight, Shevchenko also dismissed any questions of nerves ahead of the release of what is her feature film debut in less than two months’ time.

“Nervous? Definitely no,” the fighter known as ‘Bullet’ said. “I saw myself on screen how I look there – it’s kind of angry.

Eco India, Episode 124: How a biogas project in a Tamil Nadu village is putting cow dung to good use

What Do We Know About Anjali Sharma, The 17-Year-Old Climate Activist Who Is Taking On The Australian Government?

Decolonising creative writing: It’s about not conforming to…