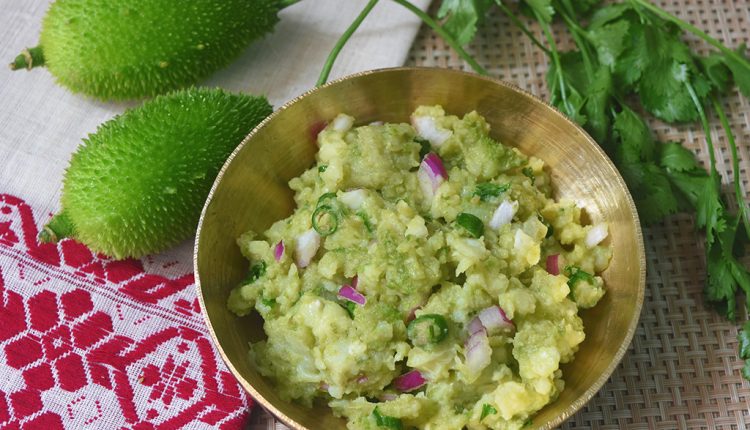 There are myriad dishes that do not enjoy their moment in the sun, but are just as worthy as their mainstream counterparts. Pitika, revered and relished in Assam, is a case in point. The humble fare is prepared by boiling, steaming, or roasting a vegetable or fish of choice, which is then mixed with mustard oil, chopped onions, green chilies and fresh coriander.

There is no right or wrong way to make pitika, believes food writer and consultant chef, Sanjukta Dutta. “It is made with a single or a combination of vegetables. The choice of condiments and aromatics is also up to the cook.”

Growing up, this delicious side dish always came as a rescue to the standard fare of rice, dal and sabji. Mum was a working professional. Dad was no good in the kitchen. And pitika was the easiest way to add versatility to meals. While it is a perfect accompaniment to mains at lunch and dinner, it can also be spread on toast and enjoyed at breakfast. The leftovers often find their way into sandwiches, parathas and chops. Here are a few renditions of pitikas that will teleport you to an Assamese kitchen.

This wildly popular dish is an integral part of bhaat dail alu pitika, the comfort food of most Assamese. To make alu pitika, boil or roast a few potatoes. Peel, mash and toss with salt, mustard oil, onions, chilies and coriander (can be substituted with maan dhoniya or sawtooth coriander for a stronger fragrance). It is also advisable to add a handful of boiled green peas or julienned ginger.

My uncle and restaurateur Anup Borpatrogohain prefers roasting to boiling. “Roasting preserves the taste of the vegetable,” he says. “This small hack makes your pitika more flavoursome as it retains less water.”

When we were little, Growing up, my siblings and I used to fight over this house-favourite recipe. Throw in some hand-crumbled, boiled eggs into alu pitika and you have the koni alu pitika. A word to the wise: take care not to crush the eggs too finely. You want to have chunks of egg white and yolk you can bite into.

Bhaat kerela, also known as teasel gourd or spiny gourd, is best devoured as pitika. First, scrape off the gourds’ tough exterior and peel the potatoes. Dunk the two in boiling water until they soften, then mash and follow the original recipe. You may choose to keep the seeds as they add a pleasant crunch.

Bhaat kerela, also known as teasel gourd or spiny gourd, is devoured as pitika in most Assamese households. Photo by: Hitesha Phukan and Shaba Taskin

Gam’s Delicacy, a Guwahati-based restaurant serving ethnic Assamese cuisine, makes koldilor pitika on special occasions. Their recipe varies slightly. Boil or steam a koldil (banana flower) and keep it aside to cool. Chop onions, ginger, green chilies and coriander. In a pan, heat mustard oil and add garlic and dried red chilies until they sizzle. Mash the koldil, sprinkle a dash of salt, mustard oil before folding in the chopped and fried ingredients. Mix well and garnish with more coriander.

Pura means burnt and jolphai means Indian olive. Pura jolphai is a refreshing, sour pitika. Grill a few jolphais over a wood fire or a low gas burner flame. Once cooked, discard the pit and peel the skin, crush and add salt, oil, chillies, a hint of ginger garlic paste, and voila! Your jolphai pitika is ready.

“Pura kordoi pitika is a winter delight,” says Dutta. “In villages of upper Assam, it is a common sight to see people roasting kordois (starfruit) in their clay ovens for an afternoon meal.” To make this pitika, roast a couple of ripe or semi-ripe, citrusy starfruits, beat them into a pulp and cook with salt, mustard oil, onions, coriander and green chillies.

Teeta kerela, or bitter gourd, makes an excellent pitika. You can boil the gourds and the potatoes together. If the seeds of the gourd are young, you may use them in the recipe.

For pura bengena pitika, take a large brinjal, puncture it with a knife in several places and smear it with mustard oil. Hold it over a fire and roast evenly. Start near the stem and slowly make your way towards the tip. Once done, allow it to cool, then peel the charred skin and cut off the stem. Brinjals tend to have worms in them, so check the flesh before mashing. You can also add a boiled potato to the pitika or a burnt mashed tomato for acidity.

Kaas kol is a plantain that’s cooked and eaten as a vegetable. It is a good source of iron and a home remedy for diarrhea. Kaas kolor pitika shares in common alu pitika’s recipe. Remember to boil the plantains with the peels on and not overcook them, or they’ll turn soggy.

“Kaathalu or elephant foot yam, is a rich source of vegetarian protein,” mentions Dutta. “We normally give it to the elderly as it is easier for them to chew and swallow.” For this pitika, boil or roast a section of kaathalu, peel the skin, mash and proceed to make pitika.

Ronga lau pitika is a great way to eat pumpkin. The trick is to add a squeeze of lemon, preferably kaji nemu or a local variety of the Assam lemon. The peel of the pumpkin goes into the pitika, so don’t throw it away. Use sawtooth coriander in place of regular coriander as it pairs better with this recipe.

Kothal guti (jackfruit seed) pitika is a seasonal delicacy enjoyed during summer when jackfruits are available aplenty. You can boil or roast the seeds for this dish. Jackfruit seeds have a waxy consistency. Adding a boiled potato or chunks of elephant foot yam helps soften the texture.

Pura maasor pitika can be made with any fish that has scales. Rohu and xol are popular choices. Photo by: Sanjukta Dutta

“Pura maasor pitika can be made with any maas (fish) that has scales,” says Borpatrogohain. “Goroi (spotted snakehead) and kawoi (climbing perch) are commonly used for cooking, but xol (snakehead murrel) and rou (rohu) are also used.”

To make pura maasor pitika, clean and grill the whole fish over embers or on a low gas flame. Scale and debone it, crush and add salt, oil, onions, chilis and coriander.

For this preparation, steam a cup of pre-soaked mosur dali or split red lentils. Add a wee bit of ginger to elevate the taste of this pitika.

Green leafy vegetables are collectively known as xaak (pronounced haak, with the ‘h’ sound coming out as a short burst of air from the epiglottis) in Assamese. According to Dutta, mosundori (fish mint) and durun (Leucas aspera) make wonderful xaakor pitikas.

Mosundori is used to treat an upset stomach, burns and insect bites. It has a pungent smell which might be a tad off-putting to the uninitiated. Dutta recommends adding a few cloves of garlic while boiling or steaming the leaves to scale down the pungency.

Durun relieves fever, sinusitis and intestinal worm infection in children. It has a slightly astringent and bitter taste, which can be mitigated by crumbling a boiled potato or plantain.

Want to protect your kids from obesity? Get enough sleep

Vikram Seth’s ‘A Suitable Boy’ is…