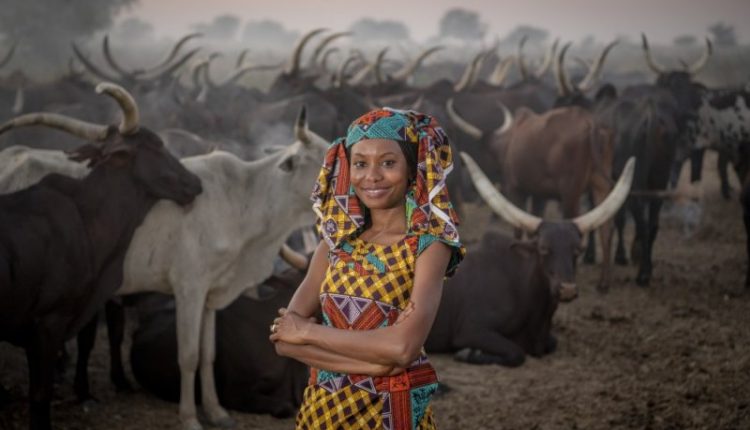 Five young pioneers from countries as diverse as Nepal, United States, and Chad were awarded the illustrious Rolex Awards for Enterprise for 2021 recently

Rinzin Phunjok Lama, Luiz Rocha, Hindou Oumarou Ibrahim, Gina Moseley, and Felix Brooks-church join the long list of Rolex Laureates, including many from India who have been awarded the honour annually since 1976 for their bold, visionary projects that can help reinvent the future. Among the five men and women who hail from around the globe — from Brazil, Chad, Nepal, the United Kingdom, and the United States — are a marine scientist, conservationist, polar explorer, social entrepreneur, and a geographer and climate advocate. A virtual event celebrating the new Laureates will be held at the end of year.

The five Laureates were selected by a distinguished 10-member international jury that included the Indian tech entrepreneur Meena Ganesh, India. The jury met virtually in November 2020 to choose the winners from a shortlist of 15 finalists, created from a field of 1,659 candidates from 139 countries, with the US (13 per cent), Brazil (10 per cent), and Nigeria (7 per cent), ranking in the top three. While the average age was just under 40 years old (39.4), 26 per cent were under 30, with the youngest candidate at 18, and the oldest, 86. Overall, 34 per cent of the applicants were women. Over 50 per cent of all candidates were from the environment (34 per cent) and science and health (26 per cent) categories.

“The 155 winning projects over nearly a half century have had a real impact on the world, with millions of people around the globe benefiting,” says Arnaud Boetsch, Rolex Director of Communication & Image. “Marked by individual achievement, excellence and performance, the Laureates and their projects reflect the values that have underpinned Rolex from its earliest days.”

Each of the winners will receive funding for their projects and other benefits such as worldwide publicity, which often engenders further support. “Rolex has long recognised its responsibility to play a part in creating a sustainable planet, a Perpetual Planet,” adds Boetsch, “rather than venturing into the unknown and discovering uncharted lands, the new breed of explorers is committed to protecting the planet. The five Laureates are prime examples of these guardians of the future.”

The Rolex Awards were set up in 1976 by André J. Heiniger, then Chief Executive Officer of Rolex, to mark the 50th anniversary of the Rolex Oyster, the world’s first waterproof wristwatch. Intended to be a once-only celebration, the Awards drew so much international interest that Rolex transformed them into an ongoing programme that has, in the years since, supported 155 Laureates whose endeavours have made a significant contribution worldwide to improving life and protecting our planet. According to Heiniger, “We initiated the Rolex Awards for Enterprise out of a conviction that we had a responsibility as a company to take an active interest in improving life on our planet and in the desire to foster values we cherish: quality, ingenuity, determination and, above all, a spirit of enterprise.”

The Awards are now one of the three pillars of the Rolex Perpetual Planet initiative launched in 2019. It supports individuals and organisations using science to understand the world’s environmental challenges and devise solutions that will restore balance to the ecosystem. It is part of the initiative that includes an enhanced partnership with the National Geographic Society to study the impacts of climate change, and Sylvia Earle’s Mission Blue initiative to protect the oceans through a network of marine  ‘Hope Spots’.

The Rolex Awards are also unique in several ways. Unlike most other award and grant programmes, they are not designed to recognise past achievements — they are given for new or ongoing projects. Candidates must be aged 18 or over, and there are no academic or professional requirements, nor any restrictions on gender or nationality — anyone, anywhere, can apply for a Rolex Award. This has allowed many people without access to traditional funding sources to gain recognition and funds.

The tangible benefits of the Laureates’ projects are varied. In those directly related to the environment, for example, 21 million trees have been planted; 34 endangered species and 27 major ecosystems protected, including 57,600 km2 of Amazon rainforest; hundreds of new species have been discovered; 17 challenging expeditions have been completed; and 48 innovative technologies have been developed for a range of applications.

Luiz Rocha grew up near the sea in Brazil, and started diving as a teenager, deeply attracted to discovering the ocean’s mysteries. “I decided to be a biologist at age five or six, and I’ve just always had this attraction to going out in the ocean and admiring marine life.” Twenty years ago, he started diving at significant depths, mastering the advanced technical skills required for deep diving. He has now spent more than 6,000 hours underwater, and has undertaken more than 70 scientific expeditions, half of which he has led. Nothing captivates him more than exploring the oceans.

Rocha’s project, which will include three expeditions over two years in partnership with the Maldives Ministry of Fisheries, will greatly augment knowledge of the species living in the reefs and also provide valuable data about conditions and temperature changes over extended periods. Rocha expects to find many new species of fish. In the Pacific Ocean, for example, as many as 10 new species are discovered for each hour of deep reef exploration, and he anticipates rates in the unexplored Maldives reefs to be even higher.

Scientist and environmentalist Rinzin Phunjok Lama is a leading light in the new, much-needed, generation of conservationists determined to protect the nation’s rich biodiversity. He was inspired and mentored by 1981 Rolex Laureate, wildlife biologist Rodney Jackson, who spent four decades of his life protecting the threatened snow leopard and initiated the first-ever radio collar study on snow leopards in western Nepal. Lama has made it his life mission to protect not only the snow leopard, but also the threatened Himalayan wolf, Himalayan black bear, wild yak, Tibetan argali, musk deer, and other species of Nepal’s high-altitude wildlife.

Lama’s project is science-based, using, for example, field surveys and camera trapping techniques to establish the baseline number of mammal species, while supporting the development of new enterprises that will expand the possibilities for local people’s source of income. At the same time, he will combine science with traditional knowledge and indigenous Buddhist philosophy to educate the locals in environmental conservation.

Lake Chad, in the Sahel region of west-central Africa, provides water for over 30 million people living in the four surrounding countries, Chad, Cameroon, Niger, and Nigeria. But, as climate activist and advocate for the rights of indigenous peoples, Hindou Oumarou Ibrahim explains, Lake Chad is shrinking rapidly. “When my mother was born, Lake Chad used to be about 25,000km2 of water,” she said in 2019. “When I was born over 30 years ago, it was 10,000km2. And now it’s about 1,200 km2.”

Ibrahim is a member of the Mbororo pastoralist people in Chad. “We are at the front line of climate change,” she says. “When the seasons change, it changes our daily life.” Climate change, along with population growth, has exacerbated tensions between the nomadic Mbororo herders and settled farmers. The situation has deteriorated further because of the COVID pandemic and widespread floods that began last October.

Ibrahim is convinced that the best way to manage the conflict is to bring people together. She invites men and women, nomadic pastoralists and settled people, to conduct participatory 2D mapping of the area. Natural features, such as ridges and plateaus, are mapped out on a board, which leads to the creation of an intricate 2D/3D landscape model from which information, such as an access point to water or the presence of fruit trees, can be added. Ultimately, the maps will allow the conservation of resources with everyone agreeing, for example, on how to share corridors for animals and access to fresh water.

The project caught the attention of the national government, which began using the survey to inform public policy. The Rolex Award will permit Ibrahim to scale up her mapping work in Chad and neighbouring countries.

With one eye on Earth’s past and the other eye on humanity’s future, in a world first, British polar explorer and climate change scientist Gina Moseley is preparing to lead an expedition to the planet’s northernmost caves in Greenland.

While the expedition will explore several caves, there is one giant cave that Moseley is captivated by. She first found out about it through a chance encounter at a Bristol caving club in 2008. A fellow caver, Charlie Self, described the cave and gave Moseley a folder containing an intriguing article that related how, during the Cold War, US reconnaissance aircraft looking for emergency ice-free landing sites spotted a giant cave set high in a cliff above a lake in Wulff Land on the tip of northern Greenland. And there the story was frozen for 60 years.

Moseley’s six-member team will have a long journey to reach the region. Once there, they will travel long distances on foot in the 24-hour sunlight. They hope to explore the giant cave which, despite much interest and speculation, has never been visited, because of what she describes as its “remote location, difficult logistics, and the very high cost of an expedition to north Greenland”.

“The substantial funding provided by Rolex for exploration is a unique opportunity to achieve this,” she says. Most organisations, she points out, require proof of concept before giving out funding. Rolex, however, recognises the value of exploration teamed with science and is committed to supporting such ventures. Without Rolex’s support, she adds, scientific questions in her research about climate change “are unlikely to be answered for many decades”.

American social entrepreneur Felix Brooks-church is tackling one of the world’s greatest afflictions — malnutrition, which affects 2 billion people globally, and is linked to half the preventable deaths of 15,000 children every day.

His determination to tackle malnutrition eventually led him to co-found and lead Sanku, a non-profit social enterprise, in Tanzania. Brooks-church formulated an ingenious solution to the colossal problem of malnutrition — a device to fortify flour with nutrients and, importantly, a business model that ensures there is no extra cost to consumers and millers. “What we are doing is adding life-saving nutrients to the staple foods that millions of people depend on every day,” he says.

To do this, he developed and patented the ‘dosifier’, a device that looks like an electronic scale and can be installed in small-scale mills, many in isolated areas, which produce up to 95 per cent of the maize flour that is a staple in East Africa. This represents the first time that these local millers are being mobilised on a large scale to fight malnutrition. Small mills are often left out of national nutritional fortification programmes because most small-scale millers are unable or unwilling to pay for nutrients. In addition, most governments do not have adequate manpower to monitor small mills.

Sanku still relies on philanthropy to purchase dosifiers. The organisation will use the funding from the Rolex Award to purchase 40 dosifiers to transform small-scale mills, which will feed up to 200,000 people with critical nutritious flour. Brooks-church hopes that the exposure that Sanku gains from winning the Rolex Award will help raise Sanku’s profile, attracting additional support to elevate its current reach of two million people.