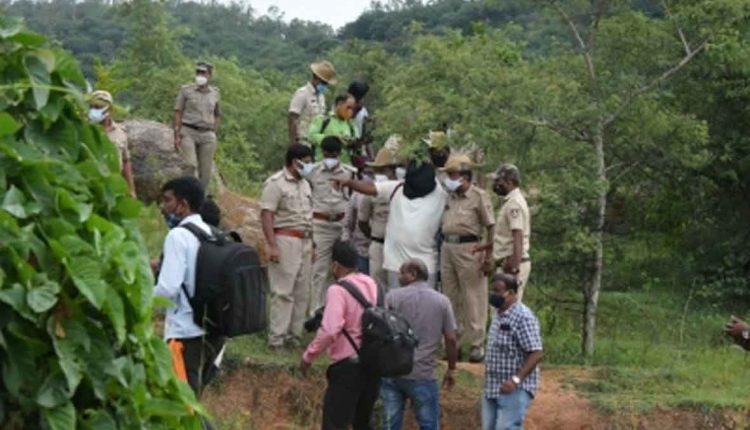 Mysuru (Karnataka), Sep 24 : In a major development in the Mysuru gang rape case, the victim has identified her attackers, a month after the assault, during an identification parade in the district prison here in Karnataka, the sources said on Friday.

The victim, 23-year-old MBA graduate, recorded her statement before the magistrate in open court under IPC Section CrPC 164 on September 22. She was brought to the Mysuru district prison under tight security on Thursday for the identification parade, according to sources.

As the accused stood in a file along with other men, the victim identified all her attackers. The process was video recorded, sources said.

The victim has recorded her statement before the magistrate for about 45 minutes and gave a detailed account of her traumatic experience.

The Mysuru police investigating team which faced steep obstacles during their probe, is now confident of getting the culprits maximum punishment. Chief Minister Basavaraj Bommai has stated in the state legislative assembly that the prosecution will seek the death penalty for the accused.

The seven-member gang from Tamil Nadu had attacked the victim in an isolated place near Chamundi hills in the limits of Avalahalli police station on August 24. The victim had gone there with her male friend late evening after attending her classes.

The accused had apparently pre-planned the attack. They assaulted the couple and hit the male victim with a small boulder on his forehead. Later, they had dragged the lady to bushes and took turns to rape her. They had demanded Rs 3 lakh from the victim’s friend, police sources said.

Her friend called his father to arrange for the money. The accused rapists had again assaulted them before leaving the place.

The father of the male victim rushed to the spot in his car and rushed them to the hospital. The victim was in an unconscious state and she was carried by the boy’s father into the entrance of the hospital from the parking lot as she was not in a position to walk, sources said.

After the incident, the victim declined giving a statement to the police and her parents also flatly denied any cooperation.

The special team though managed to arrest all the accused.

The opposition Congress attacked the ruling BJP for not insisting on taking the statement of the victim accusing them of trying to protect the real accused. They also demanded to initiate legal action against the victim for denying to record her statement.

The special team which kept in touch with the family of the victim, who had moved their daughter to Mumbai managed to convince the family and finally got the statement recorded before the magistrate successfully. Now they have also completed the procedure of identification parade.

The issue has reverberated in the state assembly and all members recommended stringent punishment to the accused persons in the case. (IANS)