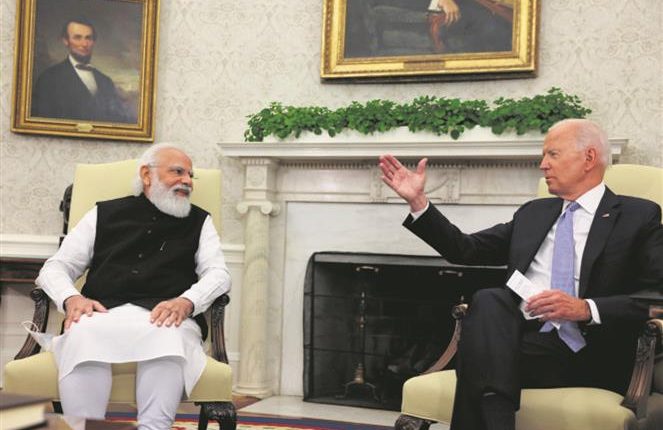 Prime Minister Narendra Modi on Friday said US President Biden had sown the seeds for India-US relations to expand further.

At a summit meeting with Biden in Washington DC, PM Modi said the seeds for an even stronger Indo-US ties would usher in a transformative period for all democratic countries.

Top American CEOs and business leaders, during their meetings with Prime Minister Narendra Modi in Washington, were appreciative of the recent reforms in India and felt that there were significant investment opportunities in the country, Foreign Secretary Harsh Vardhan Shringla said. PTI

Tikait urges Indians in US to hold protest

BKU leader Rakesh Tikait on Friday appealed to Indians living in the US to hold a protest during PM Modi’s programme on Saturday in support of the 10-month-long farmers’ stir at Delhi’s borders.

Apart from expressing optimism about the trajectory of Indo-US ties, the Prime Minister referred to three aspects that needed nurturing. Forty lakh Indian-Americans are contributing their talent to the progress of America and this talent could play an even bigger role, he said, indirectly pitching for easier immigration norms for skilled Indians.

Ties destined to be stronger, closer

I look forward to strengthening the deep ties between our nations, working to uphold a free and open Indo-Pacific and tackling everything from Covid to climate change. — Joe Biden, US President

In trade, the PM suggested a new beginning. In this new decade, he said both sides could be complementary to each other. “There are many things with the US that are needed by India and many things with India that can be useful for the US. Trade will be a major sector in this decade,” the PM said in his opening statement. Third, he pointed out that technology had become the driving force and both sides must join hands to “utilise our talents to leverage technology for the greater global good.”

US Vice-President Kamala Harris with PM Narendra Modi on the balcony of Eisenhower Executive Office Building in Washington. AP/PTI

The Prime Minister also extensively touched on the common traditions of democratic values between the two nations and how the commitment of both countries to this tradition will only increase in the future.

Biden referred to a famous statement of his in 2006 when he had predicted that by 2020 India and the US will be among the closest nations in the world. He identified cooperation on Covid, mitigating climate change and the Quad as areas of American interest in cooperating with India. Biden also mentioned the contribution of Mahatma Gandhi.

Watch: ‘He’s moved like a gymnast’ — Shahzad dives full-stretch to grab an athletic…

Will never accept Pakistani involvement in our area:…

‘Made In China’ going to be a crazy ride:…