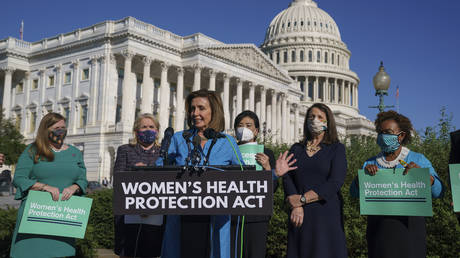 The Democrat-controlled House of Representatives has passed a bill that would legally protect a woman’s right to have an abortion. However, the vote was a tight one, and Republicans were outraged at its passage.

The Women’s Health Protection Act passed the House on Friday, in a largely party-lines vote of 218-211, with only one Democrat, Henry Cuellar of Texas, joining the unanimous Republican opposition.

The bill would enshrine the right to have an abortion, criminalizing attempts by states to hinder terminations, whether by banning such procedures before fetal viability, or requiring a pregnant woman to schedule appointments during which she might be counselled out of getting the procedure.

It would permit abortions up to the point of viability or at which a fetus could survive outside the mother’s womb. In doing so, it would make the US’ most permissive abortion laws standard across the whole country. At present, 20 states ban abortions at the point of viability, while every other state caps procedures at some stage before that point.

Under the new bill, abortions after the point of viability would also be permitted if a doctor or “healthcare provider” determined the mother’s life or “health” were in danger. The bill’s chief sponsor in the Senate, Connecticut’s Richard Blumenthal, said, while trying to pass an identical bill several years ago, that he did “not distinguish” between physical and mental health in this context.

As it stands, abortion has been legal in the US since 1973, when the Supreme Court’s ruling in the case of Roe v. Wade affirmed a woman’s Constitutional right to terminate her pregnancy. However, this ruling is open to interpretation and could potentially be overturned by the now-conservative leaning Supreme Court.

A number of states have recently challenged the scope of Roe v. Wade, with Texas earlier this month banning abortions past the six-week mark, and giving citizens the power to sue anyone who facilitates such procedures for $10,000. The Women’s Health Protection Act is a direct response to such bans, and will overturn such prohibitions if it becomes law.

Not one Republican backed the bill, and, while the Democratic National Committee hailed its passage as “a major step to fight back against Republicans’ unrelenting attacks on reproductive freedom,” some conservatives saw it as a move to legalize murder.

“You’re horrendous. You should all be ashamed!” Georgia Rep. Marjorie Taylor Greene shouted at her Democratic colleagues outside the Capitol. “Killing a baby up until birth is a ‘lack of civility,” Greene then shouted, when reprimanded by Democrat Rep. Debbie Dingell (Michigan). “It’s called murder.”

BREAKING: In a 218-211 vote, the Democrat-controlled House just passed the most extreme abortion law in American history.

It would codify the “right” to kill preborn children through all 9 months in all 50 states.

BREAKING: Nancy Pelosi and House Democrats have passed the most radical pro-abortion bill in history that would allow abortions up to birth and overturn every pro-life law nationwide. Please join us in working to DEFEAT this bill in the Senate!

The bill now heads to the Senate, where it faces significant opposition. Control of the upper chamber is split 50-50 between both parties, and 60 votes are needed to ensure it passes. Furthermore, at least one Democrat – West Virginia’s Joe Manchin – is likely to vote against it.

Nevertheless, Senate Majority Leader Chuck Schumer said in a statement on Friday that he would hold a vote on the bill “in the very near future.”

Process of finding acting jobs can be frustrating: Actor…