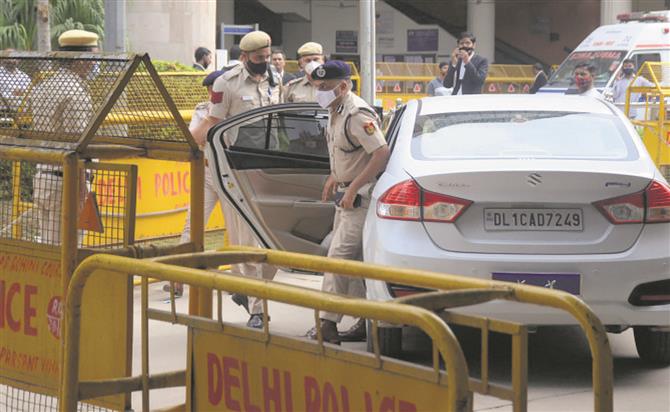 Three persons, including jailed gangster Jitender Gogi, were killed in a broad daylight shootout at the district court in Rohini here on Friday. Police officials said Gogi was shot dead by his rivals while being produced in the court.

The two assailants from the ‘Tillu’ gang who had come dressed as lawyers fired upon Gogi on the court premises, prompting the police to retaliate. The two were neutralised, said the police, adding that around 30-40 rounds were fired.

In a video footage of the shootout involving the two attackers, gunshots can be heard and policemen and lawyers can been seen trying to scramble to safety. The officials, however, said there were no other casualties or injuries.

Delhi Police spokesperson Chinmoy Biswal said both the assailants were dead along with under-trial prisoner Gogi, one of Delhi’s most wanted criminals.

Later, the Delhi Police said in a tweet, “Two gangsters killed in immediate counterfire by the police as they opened fire in lawyers’ attire at a UTP (under-trial prisoner) on Rohini court premises this afternoon. All 3 gangsters dead. No other injury or death occurred.” They also said the joint commissioner of police (northern range) would inquire into the incident and submit a report.