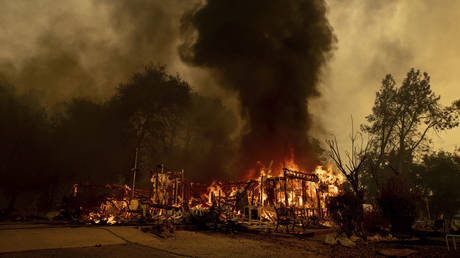 A 30-year-old woman from Palo Alto, California was arrested on allegations she ignited the Fawn wildfire near Redding, a town more than 250 miles away, after she was found trespassing in the area and “acting irrationally.”

The woman, identified as Alexandra Souverneva, was charged with arson to wildland on Thursday, according to Cal Fire officials cited by a local CBS affiliate, while another local outlet reported that she is now being held on $100,000 bail at the Shasta County Jail.

Workers at businesses in the vicinity where the Fawn Fire erupted, just north of Redding, said they initially saw Souverneva trespassing on private land and behaving “irrationally” on Wednesday – the night the fire started. Cal Fire said she later emerged from a wooded area seeking help from responders, though it is unclear why she is believed to have started the wildfire. According to investigators, the woman sought medical help and said she was dehydrated. Redding is located about 250 miles north of Palo Alto.

While some mystery still surrounds Souverneva’s arrest, conspiracy-minded online sleuths were quick to point the finger at Moscow, suggesting the woman may hail from Russia due to her Russian-sounding name and thus should harbor sinister intentions by default. One netizen dug up a LinkedIn profile apparently created by Souverneva, noting that the woman listed herself as a Russian speaker – though omitted to mention that she also claimed to speak German and Spanish in addition to English – and apparently was a PhD student in Environmental Chemistry. Her current title is listed as “shaman,” however.

Per Alexandra Souverneva’s Linked In:

So do we have a Russian setting wildfires in the US? https://t.co/6pW6oHiMMm

Some of the BC fires that kept us (in AB) living in smoke all summer, were deliberately set. I often thought, ‘hmm, I wonder if they’re Russians or religious activists.’ pic.twitter.com/1CY6LUhdQ0

— Barb☕TakeBreaksSpreadTruth😊SCIENCE is my religion (@barbetta1) September 24, 2021

If this is the woman who started the #fawnfire she’s not dumb. Something’s very wronghttps://t.co/WMk5LYnPCZ

Thursday’s arrest is not the first brush with the law for Souverneva. She was also charged with criminal trespassing in Oregon earlier this month.

The Fawn Fire she is suspected of starting has already burned 1,200 acres, with firefighters struggling to contain it as of Thursday.

Across California, some 9,000 firefighters have been battling 10 wildfires that so far this year have scorched 3,671 square miles (9,507 square kilometers), burning hundreds of homes.