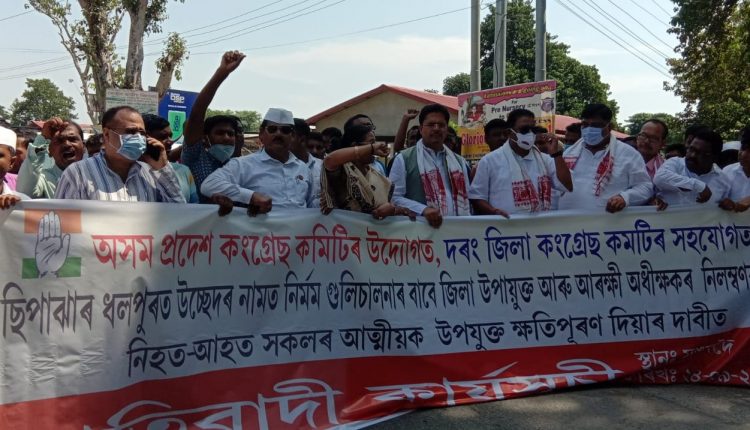 GUWAHATI, Sept 24: Congress leaders and members of the Assam Pradesh Congress Committee (APCC) on Friday staged a protest march in Mangaldoi in protest against the police firing during an eviction drive in a char (river isle) area at Dhalpur under Sipajhar revenue circle in Assam’s Darrang district on Thursday.

At least two civilians lost their lives and several others, including police personnel, were injured during the eviction that turned violent with a section of protesters apparently attacking on-duty police personnel with sharp weapons and sticks, prompting the forces to fire in “self-defence”.

The APCC delegation led by state Congress president Bhupen Kumar Borah submitted a memorandum to the Assam Governor through the through the Darrang deputy commissioner, strongly condemning what it termed as “extremely inhuman, undemocratic, unconstitutional and a clear case of state-sponsored firing on people living in the char area in gross violation of the Constitutional right to equality.”

The delegation demanded a judicial inquiry into the incident under a sitting judge of High Court, immediate halt to the eviction drive until an appropriate rehabilitation plan is made public and suspension of the deputy commissioner and superintendent of police of Darrang district.

“The manner in which a protester was ruthlessly beaten to death by police personnel (as seen in a viral video) and subsequent violence on the deceased protester by the Darrang district administration cameraperson, Bijoy Sankar Bania, in the presence of police, is horrifying,” the APCC stated in the memorandum.

“The lone protestor could have been easily overpowered by more than 40 police personnel who were present. To shoot a lone distraught protestor who is losing his hearth and home is brutally inhuman. The police should have tried to pacify him instead of killing him at point blank range,” the Opposition party stated.

The APCC further stated in the memorandum that the cameraperson and the police personnel who took part in the “barbaric act” should also be accorded exemplary punishment.

“Moreover, the families of the deceased and the injured people should be adequately compensated. In this regard, an all-party meeting, along with the stakeholders, should be immediately called to strategise and plan a rehabilitation and compensation programme for the people of Dhalpur,” it stated.

The Opposition party further pointed out that in the wake of the COVID-19 pandemic, a full bench of the Gauhati High Court headed by Chief Justice, vide its order dated May 10, 2021, had ordered that any decree for eviction/dispossession or demolition should remain in abeyance.

“In spite of this, the BJP-led government has remained adamant, behaving in an autocratic manner to evict the residents of Dhalpur without any rehabilitation plan. The Congress party feels that chief minister  Himanta Biswa Sarma, despite holding a constitutional post, taking oath to serve and protect all citizens, has behaved in a biased manner by constantly making provocative statements, which have made matters worse,” it alleged.

“The chief minister’s statement of giving full authority to police to go ahead with encounter firing had also given the police the license to kill, putting Assam in danger of turning into a police state. He should therefore watch his words and orders in future to maintain sanity in the police force and peace in the state of Assam,” the APCC stated in the memorandum.