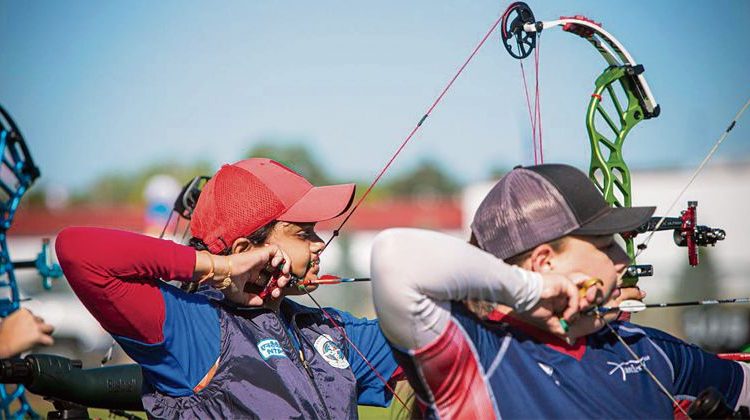 The women’s compound archery team of Jyothi Surekha Vennam, Muskan Kirar and Priya Gurjar assured India of a medal at the World Championships by storming into the final of their event in thrilling fashion. To put the icing on the cake, Jyothi then paired up with Abhishek Verma to reach the final of the mixed compound team event as well, beating Korea’s Kim Yunhee and Kim Jongho 159-156.

Despite figuring in six finals in the past, India have never won a gold in the World Archery Championships. Thus, tomorrow they will have two shots at their first gold, meeting Colombia in the final in both the sections.

Overall, India have reached the medal rounds eight times, including six finals, but had to settle for a silver medal every time. India have figured in most podiums (eight) among countries that have never won a gold medal at the World Championships.

The Indian women’s team defeated hosts United States 226-225 in the semifinals. The trio of Jyothi, Muskan and Priya came back strongly after losing the first set of six arrows 56-57. The Indians shot four 9s and two 10s against four Xs, a 9 and an 8 by the American team comprising Paige Pearce, Linda Ochoa-Anderson, and Makenna Proctor.

In the mixed team event, Jyothi and Verma defeated South Korea 159-156 to set up a summit clash with Colombia, who defeated Denmark 157-155.

The men’s compound team of Verma, Sangampreet Singh Bisla and Rishabh Yadav won their second-round match against Italy (236-230) but went down 235-238 to Austria in the quarterfinals.

The men’s recurve team of Sushant Salunkhe, Aditya Choudhary and Atul Verma lost to Chinese Taipei 3-5 in the second round.

The women’s recurve team of Ankita Bhakat, Ridhi and Komalika Bari beat Japan 5-1 in the second round but went down 2-6 to Mexico in the quarterfinals.

India sent a new-look team to the tournament after deciding not to pick all the archers who figured in this year’s Tokyo Olympics.

Mexico too will figure in two team finals on Friday — they will take on the US for the men’s compound team gold while their women’s recurve team will face off against world No. 1 South Korea. South Korean women have won the recurve team gold at 13 of the past 21 World Championships.

At the Tokyo Olympics this year, they won a gold for the ninth consecutive Games. — TNS, Agencies

Paltrow was embarrassed during stripping scene