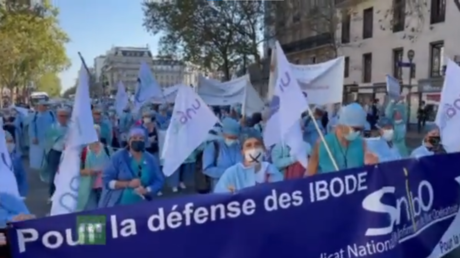 Nurses and operating room staff have taken to the streets across France to demand more pay and greater recognition for their work, with some hospitals forced to only undertake emergency operations as personnel strike.

On Thursday, state-certified nurses and operating room nurses went on strike across the country, taking their cause to the streets and calling for greater recognition from the government.

The challenges of their profession, understaffing and unhealthy work cycles have been accentuated by the Covid-19 pandemic, which has put a considerable burden on those working in healthcare.

In Paris, hundreds of nurses still wearing their scrubs chanted and blew whistles as they marched through the city. Protesters carried placards and banners, some of them saying that healthy and happy nurses are in the best interest of patients.

In Sens, a town in north-central France, local media reported that 90% of nurses had joined the strike. As a result, only emergency operations were being performed.

Rachid Digoy, president of the Collectif Inter-Blocs, the professional association for nurses in France, claimed that working conditions have been deteriorating for their members year on year.

In addition, nurses suffer from “a lack of recognition” and are paid “totally inadequate salaries” for their work. “The average salary of a block nurse is 1,700 euros. This is not enough, especially since the Covid crisis,” he stated.

The group also stated in a press release that they wanted the retirement age set at 60 years, reflecting the “arduous responsibilities within our profession.”