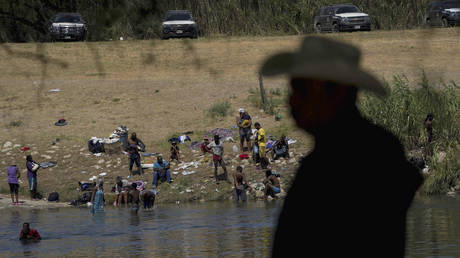 US Special Envoy to Haiti David Foote has quit his job over the Biden administration’s removal of thousands of illegal Haitian immigrants. Foote also disagreed with the US’ backing of de-facto Prime Minister Ariel Henry.

“I will not be associated with the United States’ inhumane, counterproductive decision to deport thousands of Haitian refugees and illegal immigrants to Haiti, a country where American officials are confined to secure compounds because of the danger posed by armed gangs to daily life,” Foote wrote in his resignation letter on Thursday, first reported by PBS.

SCOOP: Special Envoy for Haiti, Amb Daniel Foote, a career member of foreign service, has RESIGNED. In his letter of resignation, he says he will not be associated with the U.S.’s “inhumane, counterproductive decision to deport thousands of Haitian refugees.” Letter attached. pic.twitter.com/KlW5GoTF3u

“Our policy approach to Haiti remains deeply flawed, and my policy recommendations have been ignored and dismissed, when not edited to project a narrative different from my own,” he added, suggesting that the US deliver “immediate assistance” to Haiti’s government, as well as food and medicine to its people.

Around 14,000 Haitian migrants crossed into Texas from Mexico last weekend, setting up camp under the International Bridge in the town of Del Rio. The Biden administration has since started flying these migrants back to Haiti, though some have been apprehended and released into the US with instructions to report to immigration authorities at a later date, as is the administration’s standard procedure with border-crossers.

The precise numbers of those released versus those flown home are unclear, though anonymous officials told the Associated Press that migrants have been released into the US on a “very, very large scale,” despite seven daily deportation flights operating as of Wednesday.

Opening US borders to illegal migrants amid Covid proves Democrats have no love for America, only for holding onto power

Conservatives have hammered the Biden administration over this ‘Catch and Release’ approach, an Obama-era policy reinstated by Biden in January after it was suspended by former President Donald Trump. However, liberals have also slammed the administration for refusing entry to the Haitians, and for using border guards on horseback to turn them away from the frontier in Del Rio.

Foote is not the only person without a job over the border debacle. White House Press Secretary Jen Psaki said on Wednesday that several of these mounted Border Patrol agents “were placed on administrative leave and will not be interacting with any migrants,” accusing them of “using brutal and inappropriate measures against innocent people.” It is unclear what measures Psaki was referring to, as rumors of these officers whipping migrants went viral in recent days but were subsequently found to be false.

Meanwhile, a chorus of top Democrats have demanded a halt to the deportations. Senate Majority Leader Chuck Schumer and former presidential hopefuls Rep. Cory Booker (D-New Jersey) and Julian Castro are among those asking Biden to stop sending the Haitians back. All three have cited poverty and political upheaval in Haiti as factors behind the flood of migrants into the US. Already among the world’s poorest countries, Haiti recently suffered a devastating earthquake and the assassination of its prime minister, Jovenel Moise.

Foote referenced the aftermath of Moise’s assassination in his resignation letter, stating that the US’ backing of current de-facto Prime Minister Ariel Henry was an ill-advised intervention in the country’s affairs. “More negative impacts to Haiti will have calamitous consequences not only in Haiti, but in the US and our neighbors in the hemisphere,” he wrote.

Foote was appointed special envoy to the Caribbean nation in July, following the death of Moise.

Giles keen to take over as England head coach

I’m yet to see my full freedom: Kamal Haasan