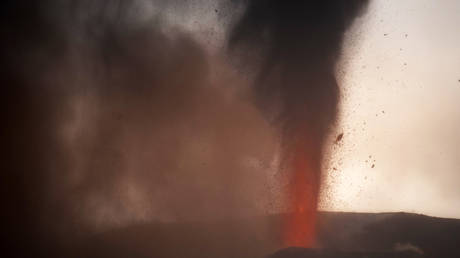 France and areas of the Mediterranean are forecast to feel the effects of the eruption on the Spanish Canary Islands this weekend as clouds filled with sulfur dioxide rise into Europe, making rain slightly more acidic.

On Thursday, Keraunos, the French observatory for tornadoes and severe thunderstorms, shared a graphic from the EU’s Copernicus program showing that plumes of sulfur dioxide are set to sweep across France and the Mediterranean basin this weekend. The densest concentration of the clouds will reach an altitude of 1,000 to 3,000 meters.

Meanwhile, the Canary Islands Volcanology Institute (Involcan) has estimated that the eruption of the Cumbre Vieja volcano which generated that sulfur dioxide could last “between 24 to 84 days”.

A weather specialist for France’s BFMTV, Christophe Person, explained that “sulfur reacts with the water vapor present in the sky and that gives sulfuric acid… what generally creates acid rain”. As a result, precipitation in the coming days will be slightly more acidic than normal in the affected areas.

Sulfur dioxide can affect the environment and human health alike, causing irritation to the lungs and eyes. Person, however, reported that the phenomenon will not be so strong because the particles are well-dispersed.

The eruption of the volcano located in Cumbre Vieja National Park on Sunday has forced 6,000 residents on the island of La Palma to leave their homes. According to an update from Copernicus Emergency Management Service on Thursday, 350 buildings have been destroyed, with the lava flow covering over 166 hectares.

A new volcanic fissure emerged overnight Monday on the Spanish Canary Island after a 4.1 earthquake was registered, producing more lava and prompting 500 islanders to evacuate. Firefighters have been working to channel the volcanic flow away from the sea as contact between the lava and ocean water could create toxic fumes.

The latest activity of Cumbre Vieja was the first time the volcano had erupted in 50 years, with its last occurring in 1971.

I am prepared to turn 40: DiCaprio