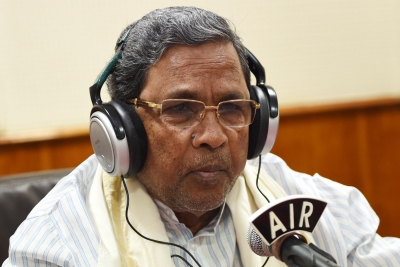 Bengaluru, Sep 23 : Karnataka’s Leader of Opposition Siddaramaiah turned an embarrassing moment as his dhoti came off during his speech in the Assembly on Wednesday into a humorous one, leaving the house in splits

Attacked ruling BJP over Mysuru gang rape case, an engrossed Siddaramaiah did not realise that his dhoti had come off, until state Congress President D.K. Shivakumar came to him and whispered to tie his dhoti which had fallen.

Not hesitating even for a second, Siddaramaiah turned towards Speaker Vishveshwara Hegde Kageri and started talking about his wardrobe malfunction.

“Ever since I was cured of corona infection, I have put on weight of 4 to 5 kgs. As a result, I have a round belly and I am facing this wardrobe malfunction. The dhoti often comes off. What to do?” Siddaramaiah asked while tying his dhoti.

As senior Congress leader and former Speaker Ramesh Kumar told Siddaramaiah that Shivakumar had whispered to him so that the incident does not come to everyone’s notice, but he had announced it to the whole house, all the members burst into laughter and appreciated the spirit of Siddaramaiah for deftly defusing an embarrassing moment.

The video of the incident has gone viral on social media. (IANS)

The post Siddaramaiah cracks joke after ‘wardrobe malfunction’ in Assembly appeared first on The Shillong Times.

JAY-Z talks about his legacy, life during COVID