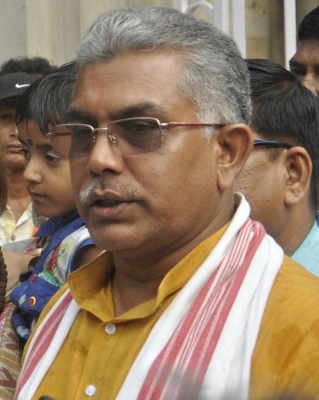 New Delhi, Sep 23 : The BJP has claimed that sensing defeat in the Bhabanipur bypoll, West Bengal Chief Minister Mamata Banerjee is making desperate appeals to the voters to elect her, saying otherwise someone else will become the CM of the state.

During her election campaign on Wednesday, Banerjee had said that if she doesn’t win the by-election, someone else will become the Chief Minister.

The BJP said that Banerjee’s statement shows that she is not confident of winning the election from her old constituency, and that she doesn’t trust anyone in the Trinamool Congress.

BJP national vice-president Dilip Ghosh told IANS, “Mamata di has realised that she will be defeated by the BJP candidate in Bhabanipur, just like what happened in Nandigram, and someone else will become the Chief Minister. Banerjee doesn’t trust anyone and thinks that she would lose control over the party if someone else becomes the Chief Minister. That’s why she is making desperate appeals to the voters.”

Ghosh claimed that Banerjee knows that this time she will face the toughest fight and might even lose the election in Bhabanipur, and that is why she is trying all the tricks to get votes.

“The presence of all the state cabinet ministers in Bhabanipur tells the truth that she is not on a strong pitch,” Ghosh said.

BJP West Bengal co-incharge Amit Malviya said, “(Priyanka) Tibrewal has been campaigning in Bhabanipur and people seem to be listening to her. This has left Mamata Banerjee worried, especially as the defeat in Nandigram has proved that she is not invincible.”

A West Bengal BJP leader said that such a comment by the Chief Minister shows her fear of losing the polls from a constituency she represented in the last Assembly before unsuccessfully contesting from Nandigram this time.

Banerjee had lost to BJP’s Suvendu Adhikari from Nandigram in the Assembly elections held earlier this year.(IANS)