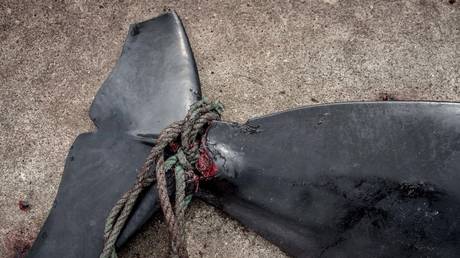 At least 53 pilot whales were killed in Denmark’s Faroe Islands this week, according to a report by the Sea Shepherd organization – the same NGO that raised the alarm after a recent mass dolphin slaughter that outraged activists.

“Only 10 days after the massacre of 1,428 dolphins, another hunt has taken place in the Faroe Islands, taking the lives of 53 pilot whales,” the international marine conservation organization said on Wednesday.

Last night, only 10 days after the massacre of 1428 dolphins, another hunt has taken place in the Faroe Islands taking the lives of 53 pilot whales. When will enough be enough? The world is watching…and we’re not “calming down”. pic.twitter.com/bnSsJkAru3

Dozens of slaughtered pilot whales can be seen lined up in rows on the quayside, with cuts on their bodies and trickling blood clearly visible in the pictures. The marine mammals were apparently killed in the waters near the village of Kollafjordur, part of the self-governing Danish territory.

#Dolphinslaughter continues in the #FaroeIslands as 53 more are butchered days after 1,400 were killed in beach bloodbath.
Haunting pics show slain pilot whales, among the largest of the oceanic dolphins, laying in port in #Kollafjørðu some appear to be calves. . #Barbaric 👿 pic.twitter.com/4oLmQ6JJNY

“We have a few local volunteers who are anonymous but are very committed to documenting what they can and sharing it with us so we can get it out to the world,” Sea Shepherd representative Valentina Crast told the news outlet.

The latest images were shot by an islander who “really wants us to end these killings,” she said, adding that activists were “shocked and angry.”

The latest killing may have happened not as part of the annual tradition – unlike the now-infamous dolphin massacre of nearly 1,500 animals – but because of negligence, according to unconfirmed reports emerging in some outlets. Some of those reports suggest the whales in question were supposed to be under surveillance, with special sensors placed on them, but there had not been enough personnel to carry out the work.

A decision to destroy the mammals was made instead, although those in charge hadn’t apparently expected the pod to be that large, having initially assumed it comprised no more than 15 whales.

Sea Shepherd has been campaigning against ‘grindadráp’, the traditional hunt in the Faroe Islands, since the 1980s. It said it would continue protesting against the bloody ritual, which dates back over a thousand years.

In total, more than 1,400 dolphins and 660 pilot whales were killed in the region this year, it said, with the recent dolphin massacre having made headlines around the world. However, no restrictions have been officially imposed.

“The Faroese have no quota for the grindadráp hunts, no season, no need for the meat and, it seems, no compassion,” Sea Shepherd’s Rob Read told Yahoo News Australia.

While some locals are equally disturbed by the tradition, others say the “outside world” just doesn’t understand, the Danish Broadcasting Corporation (DR) reported.

This week, the news platform published an interview with a 20-year-old who had participated in the killing of the dolphins earlier this month. He has since happily distributed meat from that hunt among his family and friends.

The young man said he “fully agreed” that killing so many animals at once had been “too much,” but added that he and other locals would do it again. “Of course we have to kill them. That’s all we have here in the Faroe Islands. We do not have any large fields for pigs or cows, so it’s a shame if we can’t use what we have – it’s food for us,” he told DR.

However, according to Read, quoted in the UK’s Daily Mail, these days there is “no need” for dolphin and whale meat in the Faroe Islands, and the tradition is now “little more than sport.”

A petition to end the “barbaric” tradition has been launched online by a UK animal rights activist. His call on the British government to “suspend trade agreements with the Faroe Islands until all whale and dolphin hunts end” has garnered more than 17,000 signatures, meaning Parliament must respond.

No nation should bring up their children to celebrate this barbarism please sign petition for Trade sanctions against Faroe Islands to stop whale & dolphin slaughter https://t.co/BNxTqaUdGn pic.twitter.com/oCb5WzBLMm