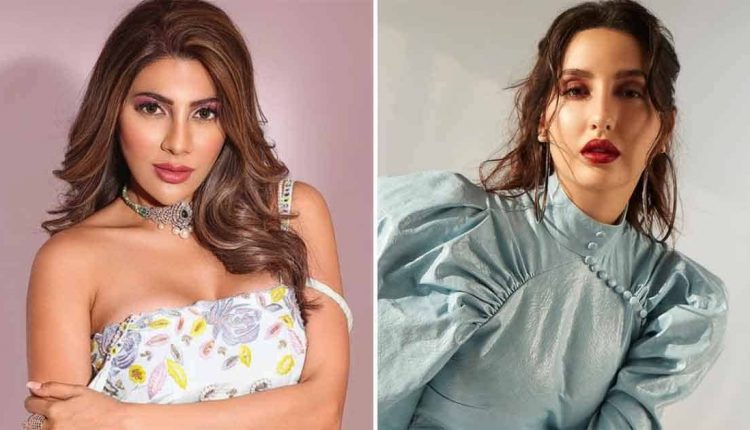 Nikki Tamboli’s Response To Paparazzi Asking Her To Pose Like Nora Fatehi Will Leave In Splits (Photo Credit: Instagram)

Until last year, Nikki Tamboli was unknown to many; however ever since she participated in Bigg Boss 14, the actress has become a household name. Many loved her for her cute and funny nature, while others were surprised by her smart gameplay. Recently, Nikki was spotted by paparazzi, while taking pictures one of them asked her to pose like Nora Fatehi, read below to know about her hilarious reaction.

Post Salman Khan’s show, the fashionista participated in Rohit Shetty’s Khatron Ke Khiladi 11, however, she was eliminated in the first week, but came back as a wild card contestant and showed her strength.

Recently, Nikki Tamboli was spotted outside a studio in Mumbai, the paparazzi asked her various questions but when one photographer asked her to pose like Nora Fatehi, she turned and laughed it off and asked, “Kaun Nora bola mujhe?”

She later took to her Instagram stories, shared the video, where she’s posing for paparazzi and wrote, “Who said, Nora?”

Before leaving the country for the shoot of Khatron Ke Khiladi 11, Nikki lost her brother Jatin Tamboli due to natural causes, although she didn’t want to leave her family but the actress said she’s participating for her brother as he was super happy to know she has been chosen for the stunt-based reality show.

However, she has now decided to never celebrate her birthday ever again, starting this year, the actress took to her Instagram stories and wrote, “I really would like to request all my Nikkians, my fans and friends to not send me any cakes or pastries on my birthday or before my birthday as I have decided to not cut cakes on my birthday from now on till years to come. I recently lost my brother and the next day is Rahki, so I really hope you’ll respect my decision and rather pray for my brother’s soul, help the people in need and feed those who actually needs it. Thank you!’

The post Nikki Tamboli On Being Asked To Pose Like Nora Fatehi: “Kaun Nora Bola Mujhe?” appeared first on Koimoi.