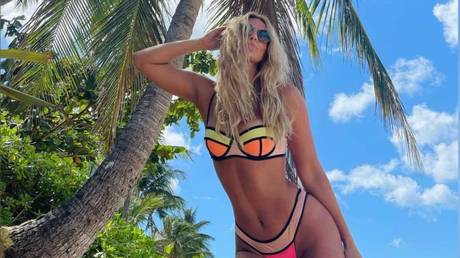 Russian six-time world breaststroke champion Yulia Efimova is enjoying some Hawaiian sunshine before the 29-year-old prepares for her planned return at the million-dollar Swimming World Cup in October.

Three-time Olympic medalist Efimova suffered disappointment in Tokyo this summer, only managing fifth place in the women’s 100m breaststroke final in what she described as her “worst performance” at a major competition.

The two-time Olympic silver medalist later revealed she was unsure over her future in the pool and whether she would keep going until the Paris Games in 2023.

In the nearer term, however, a representative has told the Russian media that the Grozny-born star plans to compete in each stage of the lucrative four-stage FINA World Cup in October.

The event kicks off in Berlin on October 1-3, before moving on to Budapest for the dates of October 7-9. That is followed by a visit to Doha on 21-23 of the month, before wrapping up in the Russian city of Kazan on October 28-30 – a location where Efimova tasted world championship gold in 2015.

World swimming organization FINA proudly announced at the end of August that $224,000 would be distributed among the top 20 athletes of each stage, with more than $500,000 going to the top 10 swim stars at the end of the overall rankings. Total prize money will be an eye-catching $1,452,000.

Efimova seems set to compete – but in the meantime has treated fans to some snaps from her island getaway at Hawaii’s Laniakea Beach.

Posing in a colorful bikini near a coconut tree, the svelte Efimova pouted for the camera and added the caption “island life.”

The swim stunner’s latest offering drew a range of emojis – from flames, to bombs and love hearts – and included some cheeky responses.

Efimova delighted fans with another bikini beach snap earlier in her holiday, on that occasion donning a bright green number.

“All this is very good! I would even say great,” wrote prominent Russian sports commentator Dmitry Guberniev.

If Efimova’s World Cup plans are confirmed, she will soon be slipping out of a bikini and into a full swimsuit as she prepares for a run at the riches on offer in Berlin, Budapest, Doha and Kazan.

‘Cold frost and sunshine’: Yulia Efimova celebrates her return to Russia with bikini snap as she begins bid to make Olympic squad

Fans in Mexico City celebrate the draw with Brazil

Role in ‘Kshanam’ total contrast to my TV…