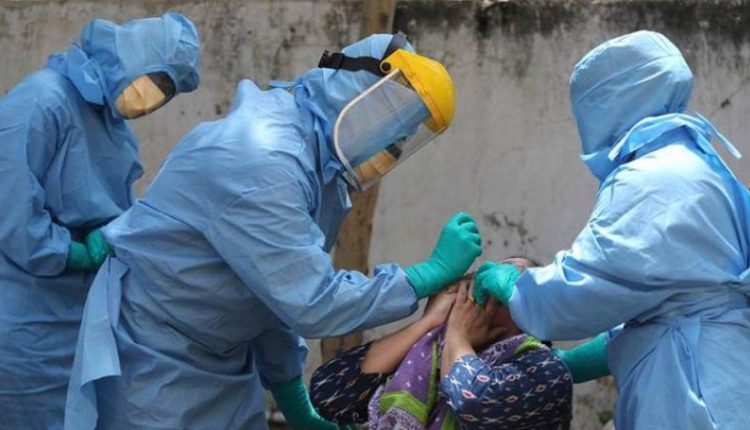 Representative image of a medic administering a swab test for COVID-19 in Kerala, July 2021. Photo: PTI

In Kerala in the last three weeks, hospital admissions have declined by 24%, ICU and ventilator requirements by 7% and oxygen requirement by 10%.
But in an interview, health economist Rijo M. John called the 36% decline in cases in Kerala since August 30 only “partly genuine”.
He had reservations about the lower number of COVID-19 tests being conducted and the state’s policy to isolate patients at home.

“The worst is behind for Kerala,” says health economist Rijo M. John, who has closely tracked Kerala’s COVID-19 situation since the start of the pandemic.

John said that in the last three weeks, hospital admissions have declined by 24%, ICU and ventilator requirements by 7% and oxygen requirement by 10%. A study by researchers at the Institute of Mathematical Sciences, Chennai, has also reported that the basic reproductive ratio – a.k.a. the R-number – has dropped below 1. The R number is a measure of the number of susceptible people to whom person infected with the novel coronavirus can transmit the virus.

R value of 0 means no spread, 1 means the transmission rate is linear (one person infecting one other person) and greater than 1 means the spread is exponential. A value between 0 and 1 means the rate of transmission of the virus in the population is shrinking/slowing down.

However, John expressed serious concerns about the 30% decline in the number of tests since Kerala reached a peak on August 30.

In an interview with Karan Thapar for The Wire, John, who is adjunct professor at the Rajagiri College of Social Sciences, Kochi, said the 36% decline in cases since August 30 is only “partly genuine”. At their peak, in mid-August, testing levels averaged just under 2 lakh a day but now average around 1-1.05 lakh a day. The test positivity rate (TPR) is currently persisting at around 15-15.5%, and John identified three reasons why.

First: the 30% reduction in testing since August 30 or the almost 50% reduction from the peak testing levels of mid-August. Fewer tests inevitably push up the TPR.

Second: the change in the mix of RT-PCR and antigen tests in Kerala. In mid-August, 55% of Kerala’s tests were RT-PCR and 45% were antigen. Now, 70% of Kerala’s tests are RT-PCR and only 30% are antigen. RT-PCR tests are more accurate while antigen tests have a significant false negatives rate. This change in the balance of testing could also have hiked the TPR. In fact, in six districts, only government hospitals conduct RT-PCR tests.

Third: Kerala follows a policy of isolating up to 80% of COVID-19 patients at home. He said the secondary strike rate of the delta variant – the rate at which other people in the same house are affected – is very high, and the home-isolation policy means infections spreads faster and to more people, driving up the TPR.

Also read: Why Is Kerala Reporting So Many More COVID-19 Cases Than Other Indian States?

He called on the Kerala government to increase tests, taking it back to the near 2-lakh levels of mid-August, and rethink its emphasis on isolating COVID-19 patients at home.

At the same time, he didn’t agree with the director of the National Centre for Disease Control, Sujeet Kumar Singh, that Kerala’s high TPR suggests that people in the state aren’t properly observing COVID-appropriate behaviour.

Speaking about a concern expressed by Singh six weeks ago, after he returned from Kerala as the head of a team sent by the Indian government, that pressure in hospitals in the northern districts of the state is worrying and that in Malappuram in particular hospitals were 90% full, John said: “The situation has changed significantly and improved vastly.”

He said both the incidence of serious illness and the consequent pressure on hospitals is markedly lower today, and no longer a problem for Kerala’s healthcare system.

The post Interview: ‘Worst of COVID-19 Is Behind Kerala, but Tests Must Increase’ appeared first on The Wire Science.

Have to match up to Rajesh Khanna’s acting in…