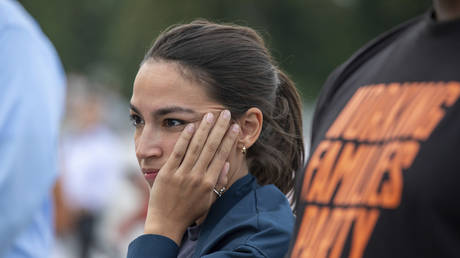 After changing her vote from ‘no’ to a noncommittal ‘present’ at the last moment, Rep. Alexandria Ocasio-Cortez was seen crying as the House passed funding for Israel’s Iron Dome missile defense system.

The House passed a $1 billion bill on Thursday to replenish Israel’s ‘Iron Dome’ missile defense system, depleted after a week of relentless rocket attacks from Palestinian militants this summer. The funding was originally included in a broader spending bill, but was voted on separately after progressives – including Ocasio-Cortez – threatened to scupper the spending bill on Tuesday if it remained included.

The funding bill passed by 420 votes to nine, with two representatives voting ‘present.’ Despite her earlier opposition, Ocasio-Cortez switched her vote from ‘no’ to ‘present’ at the final moment.

Here is the video of AOC huddling with the “Squad” members, and then changing her vote from “Nay” to “Present” at the last second: pic.twitter.com/BMyjE7NpSC

The New York Congresswoman was then seen weeping on the House floor, and being consoled by fellow Rep. Pramila Jayapal (D-Washington), who voted to arm Israel.

AOC appears to be crying on the House floor after she changed her vote from “no” to present, during voting on funding to replenish Israel’s Iron Dome Defense Systems. pic.twitter.com/DbcRemtdqY

It is still unclear why Ocasio-Cortez switched her vote at the last minute, and whether her tears were an expression of genuine anguish at the decision, or an attempt to stave off anger from her progressive supporters. However, AOC has broken with her base in a similar manner before, voting ‘present’ on a bill to fund the Capitol Police by $2 billion earlier this year, despite her advocacy for defunding law enforcement several months earlier. The bill ended up passing by a single vote.

AOC and fellow progressives Ilhan Omar (Minnesota), Rashida Tlaib (Michigan), Cori Bush (Missouri) and Ayanna Pressley (Massachusetts) are commonly known as ‘The Squad,’ and typically vote together and are seen as pushing the Democratic Party to the left.

Yet Omar, Tlaib, Bush and Pressley all voted against funding the Iron Dome, with Tlaib delivering a throaty condemnation of Israel’s “violent apartheid” occupation of Palestine and “war crimes” against the Palestinian people.

Thanks to the courageous congresswoman Rashida Tlaib for her brave situation in facing challenges, telling truth about apartheid Israel and insisting on Palestinians’ rights in security and their freedom from Israeli occupation.#FreePalestine pic.twitter.com/B8yO8goCZW

AOC’s decision was immediately called out by leftists online, and some pundits took the vote as a sign of the New York progressive cozying up to the Democratic establishment as a means of furthering her career.

Says a lot that AOC wasn’t even able to vote against an Israeli apartheid measure that everyone already knew would pass regardless of her vote.

While Tlaib, Omar, Bush and Pressley voted NO to fund Israel’s Iron Dome (arguing they should fund it themselves), AOC voted “present”, just like she voted “present” on Pelosi’s $2b for the Capitol Police.

can’t wait until we hear reports of aoc crying in disarray in the oval office after ordering a drone strike on yet another colonized nation when she’s president in 8 years https://t.co/M90Hw9NSLB

It’s a tendency to look down on our language: Milap…