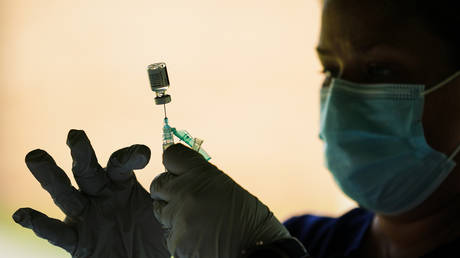 A US Centers for Disease Control and Prevention (CDC) advisory panel has endorsed Covid-19 vaccine booster shots for the elderly and other high-risk adults, paving the way for the Biden administration to roll out third jabs.

The Advisory Committee on Immunization Practices on Thursday recommended giving third doses of the Pfizer-BioNTech vaccine to people 65 and older, as well as to individuals 50-64 whose medical conditions make them more likely to suffer serious illness or death from the virus. If the CDC accepts the recommendation later Thursday, as expected, the administration will have cleared its final hurdle to begin offering the booster shots.

‘Blow-dart it into them!’ Outrage as FDA employee caught saying African-Americans should be vaccinated against their will

The CDC endorsement comes one day after the Food and Drug Administration (FDA) approved third doses of the Pfizer-BioNTech shot for essentially the same groups of people – seniors, people with underlying health conditions and individuals who work in high-risk environments, such as nursing homes, hospitals and prisons as well as schools and grocery shops.

Both agencies stopped short of approving booster shots for all adults, as the administration had sought. More than a month ago, President Joe Biden announced plans to begin offering booster shots to all Americans 16 and older, saying they would begin on September 20. That move angered some public health officials and reportedly contributed to the resignations of two FDA vaccine officials because the president pushed ahead with his booster-shot plan without adequate regulatory review.

The World Health Organization has urged rich nations to refrain from starting booster-shot programs because many poor countries are far from having enough vaccine supplies to administer their initial rounds of shots.

Chief White House medical adviser Dr. Anthony Fauci has said that all Americans will eventually need to get booster shots to be considered fully vaccinated against Covid-19 because of the waning efficacy of the jabs over time.