‘Can they also swap the stumps for non-phallic symbols?’ Cricket fans react as ‘batsmen’ ditched for gender-neutral alternatives 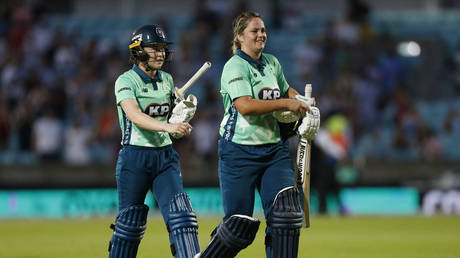 Fans online have reacted after the Marylebone Cricket Club in England announced amendments to laws and changed the traditional terms ‘batsman’ and ‘batsmen’ to more gender-neutral alternatives.

Founded in 1787, the MCC owns the iconic Lord’s ground and is recognized as the authority on cricket’s laws.

In a statement, it said that the changes – which see the terms ‘batter’ and ‘batters’ brought in to replace ‘batsman’ and ‘batsmen’ – were approved by its committee following discussions with its specialist Laws sub-committee.

They are to come in with immediate effect, with the MCC stating that it “believes that the use of gender-neutral terminology helps reinforce cricket’s status as an inclusive game for all”.

“The amendments are a natural evolution from work already undertaken in this area as well as an essential part of MCC’s global responsibility to the sport,” it added.

MCC has today announced amendments to the Laws of Cricket to use the gender-neutral terms “batter” and “batters”, rather than “batsman” or “batsmen”.

Furthermore, Assistant Secretary Jamie Cox said that the move “recognizes the changing landscape of the game in modern times” with the new terms “a natural evolution in our shared cricketing language” while the terminology “has already been adopted by many of those involved in the sport.”

“It is the right time for this adjustment to be recognized formally and we are delighted, as the Guardians of the Laws, to announce these changes today,” Cox stressed.

The MCC has also specified that the fielding position ‘third man’, along with other cricketing terms like ‘nightwatchman’ and ‘12th Man’ aren’t included in the Laws of Cricket they oversee.

Great news. Will really help to get more girls and women playing the glorious game

👏 sometimes small changes can make all the difference for some people, great move

Applauders of the move were manifold.

“Great news,” said one. “[It] will really help to get more girls and women playing the glorious game.”

“Sometimes small changes can make all the difference for some people, great move,” approved another.

“The replies here from dull gammons are just proof that this is the correct change to make,” concluded one more onlooker.

Never heard so much rubbish in my life pic.twitter.com/a93zkq2wqF

A cricketer isn’t a ‘batter’.
This is batter: pic.twitter.com/lHtvwXli69

Can they also replace the stumps with non phallic symbols

As expected, though, anger was the order of the day elsewhere.

“Never heard so much rubbish in my life,” scoffed one user replying to the MCC’s official tweet.

“Can they also replace the stumps with non-phallic symbols?” someone else asked sarcastically.

Others lamented the application of “woke-ology”, complained the ECB (England Cricket Board) were “so woke”, and claimed the world had “gone mad”.

Although I’m a tea drinker myself, the term ‘Tea time’ I find rather discriminatory against individuals of all genders that prefer coffee or other liquads. I strongly feel that this should be changed to ‘Beverage break’ 🤣 All aboard the woke train pic.twitter.com/EqaPi8t6bV

As certain parties argued among themselves that ‘batter’ is actually a mixture of flour and other ingredients used for baking, or the correct term for people who bat in other sports such as baseball, cooler heads prevailed.

“Why can’t we just call a man ‘batsman’ and a woman ‘batswoman’?,” it was posed.

A woman also highlighted that she and her fellow women players “were called batsmen” in the 1990s and were fine with it.

“It wasn’t a problem or seen as derogatory in any way. It was the term used for the person batting,” she clarified.

As a kid l played cricket whenever l could. I watched it instantly and looked up to a lot of batsmen. I modelled my technique on them. Never once did l feel awkward or offended by the term. I was a batsman and proud of it.

Another female agreed, and said that she played cricket whenever she could as a kid.

“I watched it instantly and looked up to a lot of batsmen. I modeled my technique on them. Never once did l feel awkward or offended by the term. I was a batsman and proud of it.”

“Batter is such a horrible term. [It’s] like calling a bowler the chucker. Like you I never once had a problem being called a batsman,” the original poster added.