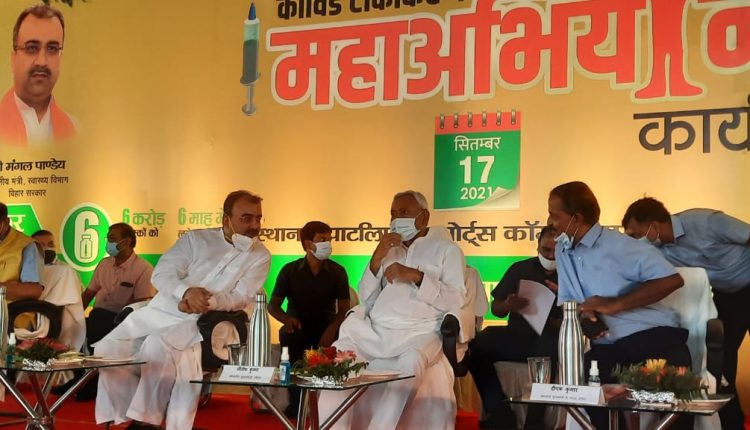 According to a Scroll report, Bihar’s record was aided by ‘offline vaccinations’ – doses administered on preceding days were uploaded to the CoWIN portal on September 17.
Health workers and data entry operators said they were under ‘tremendous pressure’ to perform on Modi’s birthday.

New Delhi: Data-fudging and political pressure on health workers played a role in Bihar’s push to report its highest COVID-19 vaccinations on September 17, the birthday of Prime Minister Narendra Modi, Scroll has reported.

On September 17, the country reported that its health ministry had delivered 2.5 crore doses of COVID-19 vaccines. Several government functionaries and Bharatiya Janata Party (BJP) politicians described this as a “gift” to Modi. Bihar was responsible for more than a tenth of the vaccines administered on that day, with 33.98 lakh doses until midnight on September 17.

But according to Scroll, this record was aided by ‘offline vaccinations’ – meaning that workers administered vaccines on previous days but uploaded the corresponding daya to the CoWIN portal only on September 17, to artificially boost the number for this day. Health centre officials and data entry operators from several districts said that while more doses than usual were indeed administered on Modi’s birthday, they also had instructions to upload the data of vaccines administered on September 15 and 16 on September 17.

An official who monitored the Electronic Vaccine Intelligence Network, a portal that records the utilisation of vaccine doses and the status of the supply chain, told Scroll that he noticed “negligible utilisation” of vials in Bihar on September 16. When he rang up district officials, they said “vaccination was happening offline” and that they “had instructions to upload data on September 17”.

Data on the CoWIN portal’s dashboard shows that the sharp surge on September 17 in Bihar was preceded and succeeded by lower than average doses administered. For example, on September 16, only 86,253 doses were administered, and on September 15, 1,45,593 doses were given, according to CoWIN. This was a sharp drop from the previous seven-day average of 5.5 lakh doses per day.

In the past too – most noticeably when the Union government took back control of purchase and distribution of vaccines in June this year – single-day surges have been succeeded and preceded by unusually an low number of doses being administered, suggesting that the surge was ‘manufactured’. On June 21, a then-record high of 86 lakh doses were administered across the country. But it soon became evident that BJP-ruled states had slowed the pace of vaccinations in the previous few days to artificially inflate the number of vaccines administered on June 21, the ‘International Day of Yoga’.

According to Scroll, local health officials in Darbhanga and Saharsa districts said district magistrates had issued instructions to “withhold uploading the bulk of vaccination data” on the CoWIN portal on September 16.

Officials in Darbhanga were told that the “session site”, an online slot on CoWIN to log vaccinations, would be shut on September 16. “We were asked to carry out vaccinations offline,” a medical officer told the website. On September 17, the district reported 1.26 lakh vaccinations.

A senior state government official said that the administration is “putting a lot of pressure on the health system”, adding that the vaccination programme is being handled by district magistrates. “Civil surgeons just follow instructions,” the official said.

The post Bihar ‘Manufactured’ a Vaccination Surge as Birthday Gift for Modi: Report appeared first on The Wire Science.

Eden to be differently-abled friendly