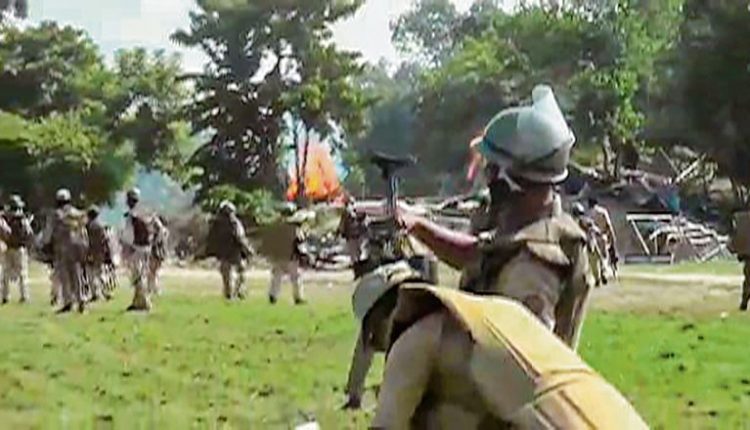 Staccato sounds of gunfire broke the fragile peace of Sipajhar in Assam’s Darrang district on Thursday as the police tried to evict “encroachers”, leaving two persons dead in police firing and at least 20 injured in clashes, and a shocking video wherein an apparently dead man with a bullet wound on his chest lay motionless but was still hit by a man slinging a camera.

A judicial probe has been ordered. The incident drew condemnation with Congress leader Rahul Gandhi calling the police action “state-sponsored fire”. Darrang SP Sushanta Biswa Sarma, brother of CM Himanta Biswa Sarma, claimed the protesters pelted the police and others with stones. The dead have been identified as Saddam Hussain and Sheikh Forid. Bijay Shankar Baniya, a professional photographer, hired by the district administration to document the situation, has been arrested. Among the injured are eight policemen, including ASI Moniruddin, who has been admitted to Gauhati Medical College Hospital in critical condition.

Darrang administration has cleared 602.40 hectares amp; evicted 800 families
It has demolished four ‘illegally’ constructed religious structures at Sipajhar
CM on June 7 had inspected areas under “illegal settlers” near Shiva temple
Had directed the administration to clear the area to start community farming

Congress leader Rahul Gandhi tweeted, “Assam is on state-sponsored fire. I stand in solidarity with our brothers and sisters in the state — no children of India deserve this.” Assam Pradesh Congress President Bhupen Kumar Borah has demanded a judicial inquiry into the “barbaric act.”

Chief Minister Sarma said the eviction drive would not be stopped. “The police has been entrusted with the responsibility of clearing the land from encroachers and they will continue to do so till the job is done.”

The Darrang district administration has so far cleared 602.40 hectares of land and evicted 800 families since Monday and demolished four ‘illegally’ constructed religious structures at Sipajhar. The Chief Minister had visited the place on June 7 and inspected the riverine areas allegedly encroached by “illegal settlers” near the Dholpur Shiva temple and directed the district administration to clear the area for the government to start a community farming project. — PTI

No fight between families, says Maneka