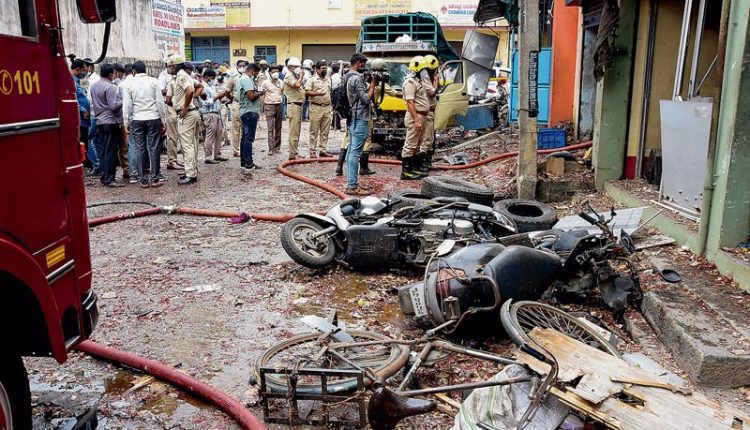 Two persons were killed in the explosion in a Bengaluru warehouse, due to the firecrackers stocked there, on Thursday, Karnataka Home Minister Araga Jnanendra said.

“This is a huge tragedy. The police, fire force, emergency services personnel have rushed to the spot. They are investigating how the incident has taken place. The police are taking all precautions, but these incidents are happening,” he said.

“I think it is the result of crackers since Deepavali is around the corner and crackers are being stocked,” he added.

Earlier the police, after preliminary investigations, had said that three persons had been killed, but it was difficult to ascertain as body parts were strewn around. Four persons suffered serious injuries in the explosion and the condition of one of them was said to be critical as he suffered 72 to 75 per cent burns.

The deceased were identified as Muralidhar, and Aslam. Fayaz, who was earlier suspected to be dead, is being treated at the hospital and his condition is said to be serious.

Meanwhile, the police have arrested the warehouse owner Babu and are questioning him. Sources said that one part of the building was used to stock crackers, and three boxes exploded, while 80 boxes each containing 15 to 20 kg remain intact. — IANS

With eyes on 2024 Lok Sabha polls, Nadda to embark on…