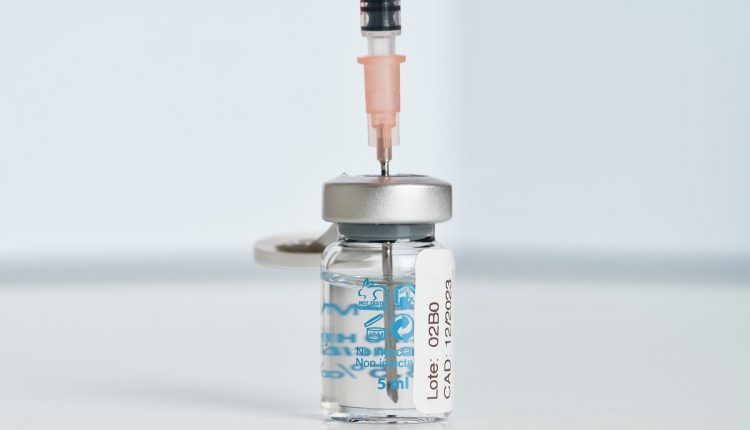 Representative image of a vaccine and a syringe. Photo: The Focal Project/Flickr CC BY NC 2.0

Many countries have rolled out a third, booster dose of COVID-19 vaccines to provide additional protection, as studies have shown that antibodies start to fade after a few months.
Experts say that in India, where only a quarter of the country’s adult population has been fully vaccinated, booster shots should not be considered at this stage.
Additionally, since existing vaccines protect against serious disease for several months – even in the case of variants – the goal should be to fully vaccinate all eligible people first.

New Delhi: Will a booster shot provide the turbocharge for COVID-19 immunity that India is looking for? Maybe in an ideal situation where most people are fully vaccinated but not when less than a quarter of the adult population has received both doses, say experts.

As the global debate on booster shots gathers momentum, several scientists here said the priority must be to ensure that more people are inoculated with at least their first jab.

Immunologist Satyajit Rath said that less than 15% of Indian adults have been vaccinated with two doses, and this clearly means that all Indians who are more vulnerable to infection have not yet necessarily gotten two doses.

“I, therefore, think that it is ethically premature to begin planning a third dose to a fortunate category of people at this stage,” Rath, from New Delhi’s National Institute of Immunology (NII), told PTI.

“It is also pragmatically premature to do so, since we have no really clear idea of who is ‘more vulnerable to infection’. We do know that some co-morbid categories are more vulnerable to serious illness, but two doses of the current vaccines currently protect quite well against that,” he explained.

Immunologist Vineeta Bal agreed, saying India should not think of providing booster doses at this stage when about 40% of the eligible population is yet to receive the first dose.

In her view, vulnerable people, those with co-morbidities, may be considered for additional shots on a case by case basis. “But it has to be remembered that additional shots do not cover specific variants, which are supposed to be more dangerous,” Bal, a guest faculty member at Pune’s Indian Institute of Science Education and Research, told PTI.

Hence the utility of an additional shot will be limited, in terms of expanding immunity, she argued.

Though India has not yet rolled out the third dose, there are reports that some healthcare workers and politicians in Mumbai have taken a booster shot.

Indian Council of Medical Research (ICMR) director general Balram Bhargava said earlier this week that a booster dose is not the central theme at the moment and getting two doses remains the priority.

As of Wednesday morning, India has administered 82.72 crore vaccine doses, according to data on the Co-WIN portal. With this, an estimated 63% of India’s adult population has received its first dose and 21% are fully vaccinated, official sources said.

According to Rath, all current COVID-19 vaccines in use worldwide remain very effective for protection against serious illness or death from the infection, without any booster doses.

“While antibody levels are indeed going down after a few months, this is neither surprising nor does it necessarily indicate any substantial loss of this kind of protection. How much longer it will be before any such loss begins to be seen is an empirical question for which we will have to wait for data,” the scientist added.

Identifying population groups with an increased risk of infections within a fully vaccinated population is necessary to minimise the death rate, said researcher Naga Suresh Veerapu.

There is an argument for booster shots if countries have the luxury to administer them.

The need has been emphasised due to concerns over waning immunity provided by vaccines and also the rise of the variants of SARS-CoV-2, especially the delta strain.

A recent study by ICMR’s regional medical research centre (RMRC) in Bhubaneswar found that the level of antibodies produced among Covaxin recipients starts to decline after two months, while the same for those who have been vaccinated with Covishield starts after three months.

Similar results have been found for many other vaccines internationally. Pfizer and Moderna earlier this week said protection from their vaccines can wane over time.

However, Bal said there is clear evidence from different parts of the world that complete vaccination provides protection from the serious form of the disease.

Individuals who participated in the clinical trials are the earliest recipients of vaccines and their follow up seems to suggest that protection from serious disease persists at least for 8-10 months, possibly more, she explained.

In India vaccination began in January 2021 and hence the duration of protection observed is shorter. With time we will know how long this lasts, she added.

An expert review in The Lancet this week concluded that vaccine efficacy against severe COVID-19, even for the delta variant, is so high that booster doses for the general population are not appropriate at this stage in the pandemic.

Scientists say this could be because protection against severe disease is mediated not only by antibody responses, which might be relatively short-lived for some vaccines, but also by memory responses and cell-mediated immunity, which are generally longer-lived.

Globally, many countries have already rolled out COVID-19 boosters.

On July 30, Israel approved the administration of a booster dose of the Pfizer vaccine for people who were 60 or older and who had received a second dose of vaccine at least five months earlier.

Britain’s COVID-19 booster rollout kicked off on Thursday with the country dishing out the third dose to health workers ahead of winter.

In the US, a panel advising the Food and Drug Administration (FDA) has recommended boosters of Pfizer’s COVID-19 vaccine for people 65 and over, and those at high risk, while voting against third shots for everyone.

Bal said the individual-centric approach versus public health approach is the major difference when some countries are recommending an additional shot of the same old vaccine for their own people.

“There are enough data to show that infection with the delta variant is also handled by vaccinated individuals better than the unvaccinated. And hence I see these moves as selfish moves. COVAX initiative should have been followed in earnest to cover the global population,” she said.

COVAX is a worldwide initiative aimed at equitable access to COVID-19 vaccines directed by GAVI, the Vaccine Alliance, the Coalition for Epidemic Preparedness Innovations, and the WHO.

Bal noted that immunity induced by current first-generation vaccines is pretty good against most variants, based on some publications, including the most prevalent variant, delta.

“Hence from the humanitarian perspective, the have-nots should be given priority for vaccination. We live in a global village and human beings can move across many kilometres easily by trains, by flights etc,” she said.

Thus aiming to attain a certain level of community immunity or herd immunity at a global level is more desirable than having pockets of people heavily immunised and pockets completely vulnerable. A virus can spread easily from high incidence areas to other areas, Bal added.

The post India Does Not Need COVID Vaccine Booster Doses at This Stage: Experts appeared first on The Wire Science.

‘I Had To Talk To My Parents’: Kareena Kapoor Khan On Why She Said No To ‘Chameli’ Initially

Napoli out despite win over Arsenal