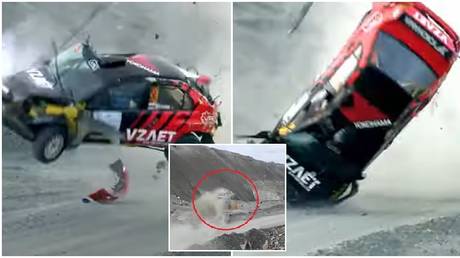 The latest round of the Russian Rally Championships saw a series of worrying incidents in which at least two crews were lucky to escape with their lives in spectacular crashes shared on social media.

The shocking high-speed smashes happened during the ‘Ekover-2021’ stage held in Asbest – a town named after its asbestos industry in Sverdlovsk Oblast on the eastern slopes of the Ural Mountains.

A notoriously unforgiving route saw the demise of at least two vehicles in crashes that caused initial panic among onlookers.

Racing for VRC-Team in his Mitsubishi Evo Lancer IX, Pavel Kozlov came a cropper when he crashed into the side of the track after taking off from a jump.

The vehicle launched into at least seven full flips before finally coming to rest on its roof.

Thankfully, there were no reports of injuries to Kozlov or co-driver Yuri Kulikov.

In an equally spectacular crash at the same event,  a Mitsubishi Lancer Evo VIII reportedly driven by Ekaterinburg racer Vitaly Mikhailov took flight at high speed after clipping the side of the track.

On that occasion the vehicle ended up on its side, with fears from worried bystanders that the smoking wreckage could catch fire.

Again, there were no reports of serious injury.

“Holy Crap!! Glad all is okay,” read another comment in English, summing up the mood.