Stopping NFL players taunting each other is RACIST? Crackdown on goading is attempt to ‘control black bodies’, claims journalist 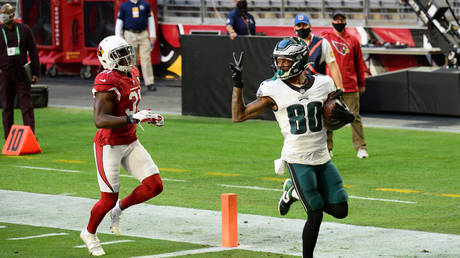 A new taunting rule brought in by the NFL continues to court controversy in American football’s top championship and has already cost teams games. But according to one writer, it’s racist and an attempt to ‘control black bodies’.

New York Giants owner John Mara was one of the biggest backers as per introducing the penalty, saying previously that “we get kind of sick and tired of the taunting that does go on from time to time on the field.”

While it is difficult to gauge whether there is widespread agreement across the board, New England Patriots coach Bill Belichik has been one notable figure who has also come out in favor.

“In general, I don’t really think there’s a place for taunting in the game,” Belichick said during an interview on The Greg Hill Show.

“I think that’s poor sportsmanship and it leads to other things. It leads to retaliation, and then where do you draw the line? I think the whole idea of the rule is to kind of nip it in the bud and not let it get started.”

DJ Reed really got a taunting penalty for this….. pic.twitter.com/pml5UOjy5r

The change has already come at a cost to one team, and will potentially hamper others.

On Sunday, in a thriller that went into overtime, the Seattle Seahawks eventually lost 33-30 to the Tennessee Titans after defensive back D.J. Reed was pulled up late for a breach in the fourth quarter.

In a game full of egos where outlandish statements are made both on the field and off it, and are either backed up or blow up in the faces of their utterers, you might think trash-talking part of the furniture.

But rather than focusing on the authorities taking the fun out of a competition enjoyed by millions worldwide, USA Today writer Mike Freeman has come up with his own race-driven take on the matter.

Stating that the “dumb” taunting rule is “one of the worst” ever introduced”, Freeman proposes that the move is really just about “control of Black bodies”.

“Control of the player base, which is 70% Black, has long been the mantra of NFL ownership and some front office members,” opines the sports hack.

“Owners, mostly, don’t see the players as partners. They see them as something to dominate.

“They still see them as cattle, something stated blatantly by former Dallas Cowboys executive Tex Schramm.”

In line with Freeman’s thinking, others have previously questioned whether the two-week NFL Combine scouting event – where college athletes work out before teams in the hopes of bagging multimillion-dollar contracts in the pro ranks – could be likened to a “slave auction” or “meat market”.

“While the league has gotten better in how it treats Black players,” Freeman concedes, “it’s still, at times, Donald Trump adjacent.”

Presenting the example of Colin Kaepernick being “essentially banished” for protesting social injustice as a perfect one of how “the NFL uses control as weaponry”, the sports race and inequality editor has been called out by some on social media.

“So if a white NFL athlete taunts he will not be penalized due to his skin color?” one user asked sarcastically.

“I don’t like the rule but you are reaching here for millionaires who choose to play this sport.”

“White players don’t get taunting penalties?” was another question.

So if a white nft athlete taunt he will not be penalized due to his skin color. I don’t like the rule but you are reaching here for millionaires who choose to play this sport.

“You must be miserable,” a separate party concluded, as Freeman was also accused of “making everything about race”.

“Bullsh*t, it’s called respect. They’re not saying you can’t celebrate with a teammate, just don’t show up the opponent,” wrote one person in defense of the rule.

Sonakshi Sinha plans to launch a fashion label in future