HI INDIA NEWS DESK
CHICAGO, IL- It was a great day to start off a match between Chicago Blasters VS Chicago Catchers.
owner of Chicago blasters Iftekhar Shareef & Consul General Amit Kumar attending the Minor League cricket match between the two Chicago-based teams Chicago Blasters and Chicago Catchers on Saturday. Before the match began, two minutes of silence was observed in the memory of those who lost their lives on 9/11.

Amit Kumar met the Chicago Blasters team owner Mr. Iftekhar Shareef and its general Manager Khurram Syed. He was introduced to the players by Captains Ashar Mehdi and Karan Kumar respectively. He wished them good luck with the league matches. CG Kumar also bowled the ceremonial first ball ahead of the match and batted for one delivery.

There was some excellent bowling, batting, and fielding on display in a nail-biting T-20 match won by Chicago Blasters in the last over of the game. CG Kumar expressed optimism that this league involving 27 teams will help promote the wonderful game of cricket in the USA and acknowledged the role of the Indian American community in that effort. 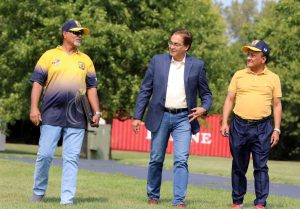 There are two other teams in the US Midwest based in Detroit and St Louis. In all, there are 27 teams in the USA franchised by USA cricket. ICC has also extended support to this effort. USA Cricket currently enjoys Associate status with ICC and the organization of the league is part of their foundational plan to promote cricket in the USA.

Chicago Blasters owner Iftekhar Shareef thanked the minor league and USA cricket for the opportunity to own a team.

Federer, Djokovic, Nadal will continue to dominate next…

Is Ganguly’s heart attack a wake-up call for 40+…