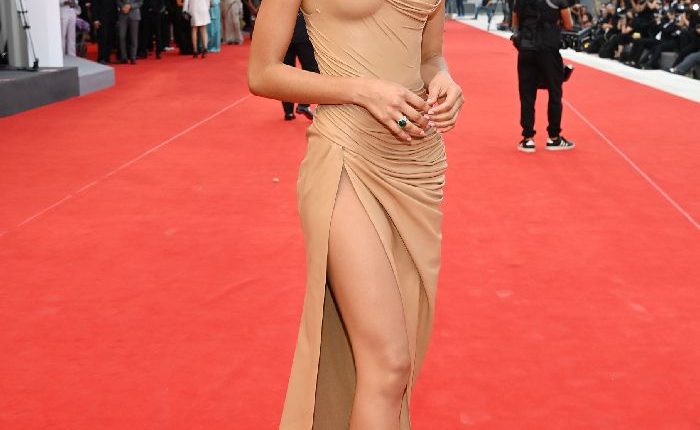 The naked-dress trend is back, people, and it’s more naked than ever. While this look doesn’t ever seem to fade away, it’s definitely packing quite the punch for 2021, including at this year’s Met Gala. We’ve seen various iterations of the trend over the years, but right now, it seems to fit in one of two different camps: a skin-color body-con dress or a barely-there dress that’s transparent or sheer or has a strategically placed piece of material (or even a combination of all three).

Cher wearing a dress by designer Bob Mackie at the Met Gala in 1974. The naked dress has a long history, of course. Those who are big Cher fans (and who isn’t?) will recall the star’s dedication to creations by designer Bob Mackie, who regularly designed risqué items for the singer. Before that, however, there was Marilyn Monroe’s infamous sheer dress she wore in 1962 to sing happy birthday to President John F. Kennedy.

Marilyn Monroe singing happy birthday to President John F. Kennedy wearing a sheer dress. The coolest takes on it—and perhaps my personal favorites—include Jane Birkin in 1969 and Kate Moss in 1993 both wearing sheer dresses with black knickers. It’s the more understated way of doing the nude-dress trend.  But in recent years, this trend has gone full glamour. Rihanna’s 2014 CFDA look and Beyoncé’s Met Gala 2015 dress by Givenchy made headlines for being pretty naked. In 2019, Kim Kardashian’s wet-look Mugler creation definitely ticked off the naked-dress trend box thanks to its body-con aesthetic and color.

Jane Birkin’s naked dress she wore to the premiere of Slogan in 1969 . Over the past couple of weeks, I’ve spotted loads of naked dresses on the red carpet, which proves that this trend is officially back. First, Zendaya wore a leather Balmain dress at the Venice Film Festival, then Megan Fox wore a Mugler frock (another wet-look gown from the designer) to the VMAs. Then on Monday, we were treated to a variety of barely-there dresses at the Met Gala—the first to take place since the pandemic. However, the ones leading the pack on the naked-dress trend here were Kendall Jenner’s pretty diamanté Givenchy gown and Zoe Kravitz’s mesh Saint Laurent dress.

Kate Moss wearing a sheer dress at the Look of the Year Contest in 1993. Normally, I’d give you some tips on how to do the trend IRL, but this is quite the tricky look to pull off down your local. Instead, if this is something you’re drawn to, perhaps it’s worth taking inspiration from the current looks and toning it down so you won’t look so conspicuous when drinking a glass of rosé. Keep scrolling to see the current naked-dress looks and then shop my edit of naked dresses.

Style Notes: One of the coolest looks from the Met Gala 2021, Zoe Kravitz’s Saint Laurent mesh frock is barely there, but she still manages to look super sophisticated.

Style Notes: While Kendall Jenner’s frock is definitely in the naked category, it’s actually based off Audrey Hepburn’s look in My Fair Lady.

Style Notes: This is perhaps the ultimate naked dress, to be honest. Sheer, skin-colored, and leaves very little to the imagination, Megan Fox knows how to embrace this trend to the max.

Style Notes: A more subtle take on the trend, this is still very much a naked dress. The skin-tone dress from Balmain has been created in leather, giving it a wet look for Zendaya’s red carpet moment.

Style Notes: Beyoncé’s take on the naked-dress trend meant going for a sheer gown with strategically placed flowers on her Givenchy gown.