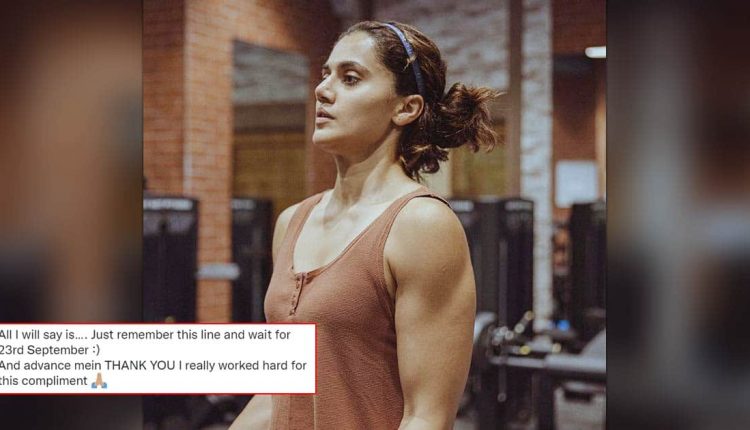 Bollywood actress Taapsee Pannu has now responded to a tweet that characterized her physique as that of a man. The picture, which showed Taapsee from the back, was revealed recently.

The Haseen Dillruba actress will be soon seen in her upcoming movie ‘Rashmi Rocket’ which is a sports film directed by Akarsh Khurana. The film is set to debut on Zee5 on October 15.

Taapsee Pannu had recently shared various images of her fierce fitness regime for the movie, in which she enacts the role of a sprinter.

Sharing the picture, a Bollywood news-centric Twitter account penned, “Ye Mard Ki Body Wali sirf @taapsee Hi Ho Sakti hai (Only Taapsee can have a manly body like this).” To which Taapsee Pannu reacted by saying, “All I will say is…. Just remember this line and wait for 23rd September 🙂 And advance mein THANK YOU I worked hard for this compliment.”

All I will say is…. Just remember this line and wait for 23rd September 🙂
And advance mein THANK YOU I really worked hard for this compliment https://t.co/O5O8zMRzP0

Rashmi Rocket has been co-written by Kanika Dhillon, who, concurrently with Taapsee, fought various trolls and even an experienced critic for their belief about their prior union, Haseen Dillruba. Directed by Vinil Mathew and co-starring Vikrant Massey and Harshvardhan Rane, Haseen Dillruba debuted on Netflix earlier this year. Taapsee recently starred in Annabelle Sethupathi, which was released on Disney+ Hotstar.

Recently, Taapsee Pannu declared her decision to turn a producer and her first endeavor is a psychological thriller titled ‘Blurr’. Talking about slipping into the producer’s hat, Taapsee stated, “I am thrilled to embark upon this new journey and diversify my love for cinema with my production house ‘Outsiders Films’. Having my business ventures, management comes naturally to me. Hence, I always thought of setting my own production house. The audience and the industry have given me a lot of support and love over the 11 years of my career. With Outsiders Films, I aim to give back to the industry and empower talent who are looking for a breakthrough and come with no background like me. Pranjal and I together look forward to opening doors for new and fresh talents, both in front and behind the camera.”

On the work front, Taapsee has Looop Lapeta, Dobaara, Shabaash Mithu, her debut production Blurr, and other movies in the line.

The post Taapsee Pannu Responds To Having ‘Mard Ki Body’ & Trolls The Troll By Taking It As A Compliment appeared first on Koimoi.

No committee was set up to oversee oxygen supply, claims…