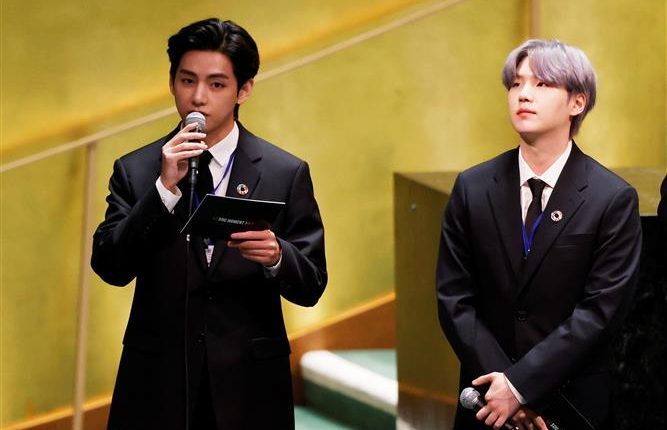 Addressing the United Nations General Assembly (UNGA) as the special presidential envoy for future generations from their native South Korea, music group BTS on Monday expressed their faith in the ability of the youth to imagine a better world and organise efforts to achieve the dream.

The Grammy-nominated band—comprising RM, Jin, Suga, J-Hope, Jimin, V, and Jungkook—attended the 76th UNGA as part of their duties as envoys and also performed their latest English single “Permission to Dance” at the UN headquarters.

In their speech, the group expressed hope for a better future with group leader RM saying, “We thought the world has stopped but it continues to move forward. I believe that every choice we make is the beginning of change, not the end.”

The band attended the second meeting of the Sustainable Development Goals Moment (SDG Moment) of the Decade of Action with South Korea’s President Moon Jae-in to lead the “the global agenda for future generations, including sustainable growth, and to expand diplomatic power in line with Korea’s elevated status in the international community”.

While it was the third time the globally popular septet made a speech at the UNGA, it was their second appearance in person.

They made their first in-person appearance in 2018 and their second address was made through a pre-recorded video message in 2020 owing to the novel coronavirus pandemic.

RM took charge of the podium to first address the gathering eventually inviting other members to join in.

“It is an honour to be here today, we are BTS appointed a special presidential envoy of the Republic of Korea. We’re here today to share the stories of our future generation.

“Before we came here, we asked the young people in their teens and 20s around the world about their past two years and about the world they find themselves in today,” the group leader, known for his English-speaking skills, said in Korean along with his group members as translated by the interpreter.

Jin then spoke about how the pandemic has affected the youth over two years.

“There were times during the past few years when I too felt bewildered and troubled, but still here, we have people who cry out, let’s live on, let’s make the best of this moment,” he said.

In a beautifully coordinated move, Jimin took over to talk about how the world changed in a flash because of the Covid-19 pandemic.

“…because we can’t stand still when we are in the ideal time of our lives to take on new challenges, it wasn’t as if we could blame anyone. And you must have felt the frustration. Here, I’m the same as I was yesterday, but the world changed like we were transported in a flash to a parallel world,” he said.

Jungkook said the group was heartbroken when their planned concert tours were cancelled and they felt sad to hear how entrance and graduation ceremonies had to be cancelled.

“These are moments in life you want to celebrate and missing out on them must have been upsetting,” he added.

Suga said while the pandemic was a time to “mourn for the things that Covid took away from us”, it was also a time to discover “how precious each and every moment with taken for granted were.”

Jimin showed the poster that the group had brought with them, sharing the pictures that fans had sent them of how they bonded with nature and explored new interests.

J-Hope spoke about the issue of climate change.

“Everyone agrees that climate change is an important problem, but talking about what the best solution might be. That’s not easy. It’s a topic that’s tough to make conclusions about,” he said.

RM said while preparing for their speech at the UN, the group learned about the young generation’s interest in “environmental issues” and how many are choosing it as their field of study.

The band members, who constantly remain in touch with their fan community called ARMY via social media platforms, had previously asked their followers to share their stories with BTS using hashtags #YouthToday #YourStories.

The group said all seven of them received their Covid-19 vaccines and they are doing everything to keep this “new reality” going forward, expressing hope that they would be able to meet their fans “face to face” in near future.

They ended the speech with the music performance of “Permission to Dance” that first saw the band singing in the General Assembly Hall, and then moving to the lobby. They finished the performance by doing the ‘international sign’ gestures for “Joy,” “Dance,” and “Peace” alongside dancers on the North Lawn. —PTI