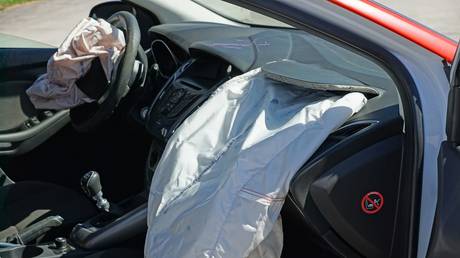 The US National Highway Traffic Safety Administration (NHTSA) is investigating some 30 million vehicles made between 2001 and 2019, concerned over potentially faulty airbag inflators that could injure drivers, Reuters reports.

The offending part – an airbag inflator made by Japanese company Takata and recalled over 67 million times in the US (and over 100 million globally) – is being blamed for at least 28 deaths around the world, 19 of which happened in the US. Over 400 people have supposedly been injured by the inflators, which can explode into metal fragments and injure crash victims when airbags are deployed.

Now, the nearly two dozen automakers who have had vehicles recalled for using the faulty part are under the spotlight again, according to a government document seen by Reuters on Sunday. Some may have had another faulty inflator installed after already being recalled over an earlier unsafe part, according to the source, said to be an engineering analysis of the airbag inflator problem. “While no present safety risk has been identified, further work is needed to evaluate the future risk of non-recalled desiccated inflators,” the agency’s report allegedly read.

Unfortunately for these 30 million vehicles now in the target of the NHTSA, installing that inflator was considered mandatory for safety at the time, like seatbelts. While newer vehicles’ bags no longer deploy in every impact, being outfitted with sensors that keep the bag dormant unless the crash is above a certain force, they may still have ended up with the faulty inflators in their cars, according to car makers like Ford who admit they continued to install ‘old’ parts even when an upgrade came along.

Many manufacturers have gotten a head start on recalling their vehicles, especially those makers, like Honda, who have confirmed multiple deaths from the faulty part. But attempts to recall vehicles are not always heeded or received – some of the Honda inflators’ victims had been issued upwards of a dozen recall notices, but were continuing to drive their vehicle in its dangerous state.

The potential recall could put a massive number of vehicles out of commission while the faulty inflator is removed or disabled, already a problem in a country that is running out of the speciality materials needed to make the increasingly elaborate computer chips that make modern cars go. Already, used cars have soared in price as scarcer new ones are being made, and many consumers are opting for older models that don’t rely so heavily on the suddenly expensive and difficult-to-source computer chips.

Car manufacturers affected by the recall include many well-known brands, from Honda and Ford to Toyota, GM, Nissan, Subaru, Tesla, Mazda, Ferrari, Daimler, BMW, Chrysler, Porsche, and Jaguar Land Rover. Many have already had to recall cars for this problem in previous years, and the NHTSA has not publicly released numbers indicating how many vehicles are still affected.

The NHTSA has not yet officially announced the investigation, according to ABC, which quoted the agency denying a need for public action.

‘You will always be missed’: Khabib Nurmagomedov pays tribute on his birthday to his late father Abdulmanap as UFC hails ex-champ