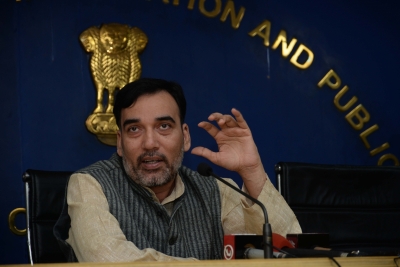 New Delhi, Sep 20 : Delhi government will initiate the process of making bio-decomposer in the national capital on September 24, Delhi Environment Minister Gopal Rai said on Monday as he urged the Union government to take action on the same line on “emergency” basis to tackle the problem of pollution caused by stubble-burning in north India.

“In comparison to 2020, we are starting to make bio-decomposer 10 days before this time. Last year, the Delhi government along with the Pusa Institute had developed a bio-decomposer that decomposes the crop residue, thereby eliminating the practice of stubble-burning. It also enhances the quality of the soil,” Rai said citing a WAPCOS report, a Union government undertaking which carried out a third-party audit on the bio-decomposer.

“We urge the Centre to take this problem on an emergency basis so that the people of Delhi and its neighbouring states can breath good air,” he said.

“As of now, we have submitted a report to the commission for air quality management,” he added while addressing a press conference here.

He further said, “Last time when we were preparing to spray the bio-decomposer on stubble, several farmers had told us that the preparations should have started earlier so that they could sow the next crop on time. Last time, we began preparing the spray solution on October 5. This time, the Delhi government will start preparing the solution on September 24.

“Like last year, the solution will be prepared at the Horticulture Department Nursery in Kharkhari Nahar. The preparations will take place centrally at this location and by September 29, we will double the quantity of the solution. By October 5, the bio-decomposer will be ready to be sprayed.”

The farmers will be required to fill a form giving the details of their lands. This entire process will be monitored by scientists and experts of the Pusa Institute and the agriculture department.

In 2020, the bio-decomposer was sprayed on almost 2,000 acres of farmland of non-basmati paddy crop.

“During the audit, the farmers reached out to us asking for the solution to be implemented over the harvester cut basmati paddy crop as well. So this year it has been decided that irrespective of the paddy being basmati or non-basmati, if the crop has been cut using harvesters and there is stubble leftover in the fields, the government will spray the bio-decomposer solution over the land for free,” he added.(IANS)

Bharat Bandh: All you need to know