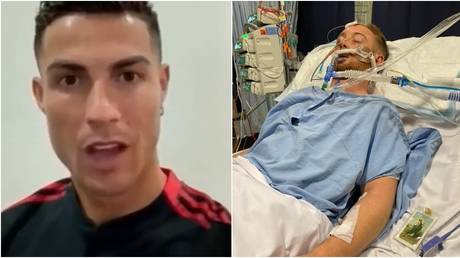 English footballer Danny Hodgson has received a message of support from Cristiano Ronaldo as the 26-year-old striker remains in a coma at a hospital in Perth, Australia, after being the victim of a vicious “unprovoked attack”.

Hodgson, who plays for ECU Joondalup in the National Premier Leagues Western Australia, suffered a bleed on the brain after being the victim of an alleged “coward’s punch” when he was set upon at a Perth train station when celebrating the end of the local football season earlier in September.

Hodgson turned 26 on Sunday and had a message of support from Ronaldo and Manchester United goalkeeper Dean Henderson – the latter of whom is a former teammate of Hodgson when the pair were at Carlisle United.

“Hi Danny, I just heard about your story. I hope you get well soon. I invite you to come to one of the games in Manchester. Get well soon my friend,” says Ronaldo in the clip.

Cristiano Ronaldo has sent a get-well message to Perth footballer Danny Hodgson, as he is still in critical condition. It is Hodgson’s 26th birthday and his parents have shared a heartfelt message, and pictures of happier times. pic.twitter.com/5HMjYa2Xi4

Manchester United goalkeeper Henderson added: “Stay strong, stay in there, you’ll get through this, I promise.

“I know how hard you are and you’ll be fine. I can’t wait to get you over to a [Manchester United] game and meet the boys. I’ve told them all about you and we’re all in your corner… we just wish you all the very best.”

The story of the attack has shocked Australia, and the young footballer’s parents, Nicola and Peter Hodgson, were granted permission to see him after flying over from the UK, despite tight Covid restrictions.

“Thank you to all the lads in the team and club at Manchester United that sent Danny Hodgson private messages of love and support,” said Nicola Hodgson on Facebook.

“The messages get played to him daily and he seems to respond.

“These lads don’t get enough credit what they do behind the scenes for family like us holding out for hope.

“A massive thanks to Danny’s childhood friend Dean Henderson for helping to make this happen, a true gent.”

Danny is still in ICU at Royal Perth Hospital after a coward’s punch in the heart our city.

We are all behind him.

Police in Western Australia have charged a 15-year-old boy with grievous bodily harm in connection with the attack. The youth will appear before Perth Children’s Court on 22 September.

Meanwhile, a GoFundMe page for the stricken footballer has raised more than $150,000.

Jammu and Kashmir: Civilian shot dead by CRPF after driver…

Mitra will quit as GST panel chairman if Centre continues to…