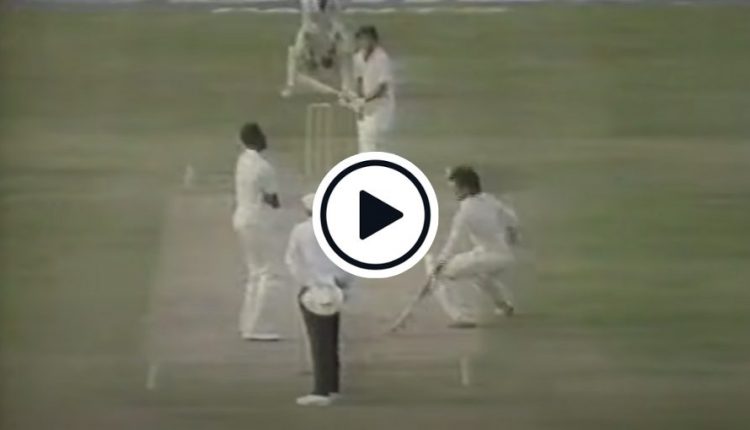 West Indies were the dominant force in world cricket during 70s and 80s, and and picked up two World Cup wins to show for it. They could have picked up even more, but for an Indian upset in ’83 and a particular call taken by Courtney Walsh in ’87.

This incident took place during the group B encounter between Pakistan and West Indies at the Gaddafi Stadium, Lahore. Pakistan walked in with two wins out of two games, while West Indies had lost a close encounter against England before thumping Sri Lanka in the next match.

Viv Richards won the toss and decided to bat. His decision was vindicated by the good start provided by Desmond Haynes and Phil Simmons, but regular breakthroughs from Wasim Akram, Imran Khan, and Saleem Jaffar ensured that the West Indies were bowled out for 216. Pakistan did no better when batting, losing wickets at regular intervals, courtesy of some lethal bowling from Courtney Walsh.

In the end, Pakistan needed 14 runs off the final over, with Abdul Qadir batting with number 11 Saleem Jaffar. The game seemed all but over when Abdul Qadir decided to steal a run off a misfield off the third ball of the over. At that stage, Pakistan needed 12 to win off 4 balls, but more importantly Qadir wanted to take strike. Luckily, Jaffar just about made it.

The next ball, Pakistan needing 10 off three now, Qadir was able to connect a meaty blow over long off for six, leaving the equation to a very achievable four off two balls. Efficient running allowed Pakistan to take two off the next ball, now they needed only two off the final ball.

The fielders came in to prevent a single as Walsh ran in for the final delivery. However, he stopped right before he was about to deliver the ball. Jaffar, the non-striker, though inside the crease when Walsh was just about to bowl, sprinted down the track. This left him stranded in the middle, while Walsh merely looked at him with hands folded. Walsh could have run-out Jaffar but decided against it.

The next ball Jaffar was more careful, and ran just as Walsh released the ball, but it wasn’t needed as Abdul Qadir smartly sliced the ball for a four. Pakistan won a memorable World Cup encounter.

While, the implications of this incident weren’t clear immediately, another loss later in the tournament ensured that West Indies weren’t able to make the semi-finals. Had Walsh actually run out Jaffar, it would have ensured a fourth semi-final spot in a row for the Caribbean team. Since then, the West Indies have reached the semi-finals of the men’s World Cup just once.

While people might have differing views on running-out a person in this fashion, Walsh had his say last year in an ICC video released last year. He said, “It brought a lot of good memories to the people. People still recognise it and appreciate it. It was something I couldn’t do because that was how it was brought up…I just couldn’t do it without a warning. And as a youngster, spirit of the game meant a lot to me… The memories will always be with me, and the appreciation that people have shown.”

You can watch the full incident here at 36:26